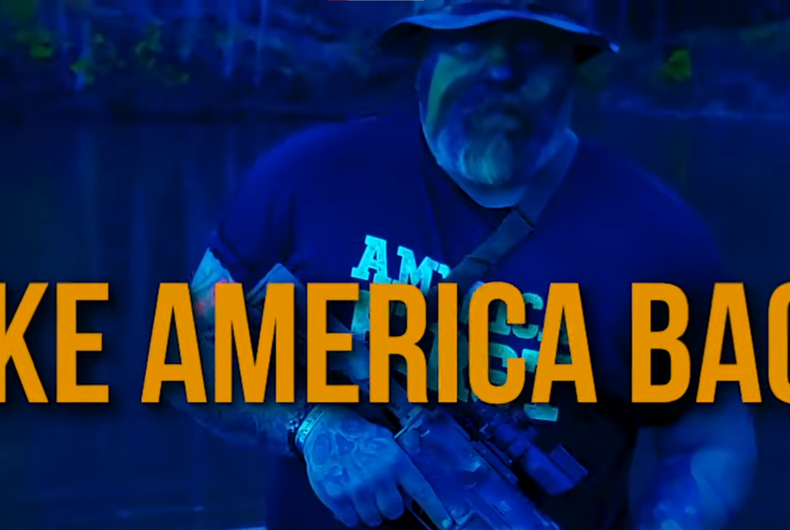 Teddy Daniels presented himself this way in a campaign adPhoto: Screenshot

Trump supporter and possible Capitol insurrectionist Teddy Daniels is running in the GOP primary for lieutenant governor of Pennsylvania, and he is facing allegations of domestic violence and misconduct from when he was a police officer.

And his response to his critics is to use a homophobic slur; those who have a problem with his allegedly violent past are “sissies.”

Daniels is campaigning on the back of his support for Donald Trump. Allegations surfacing this week which date back to the 1990s and continue for decades put him in a more negative light, painting a picture of a candidate with an out-of-control temper and a penchant for dishonesty.

“I am here,” he wrote on Twitter with a picture that appears to show him at the U.S. Capitol on January 6, 2021. “God bless our patriots.”

“Every shit rag liberal paper in the country has come after me,” Daniels said in a video posted to Facebook as journalists started to ask questions about his past. “I survived combat. Nothing that these man bun wearing purple-haired sissies can do to me can hurt me.”

He then talked specifically about a Rolling Stone investigation into his past for an article that was published yesterday.

“All right shitbag, I know your deal. What do you got? Let’s sit down. Let’s meet, and go ahead and write,” Daniels said. “Rolling Stone, you know how to contact me.… I dare you to try that strong-arm shit with me, because we will meet in person, and it won’t be a good meeting. I promise you that.”

Daniels was not able to stop Rolling Stone from publishing the article with his threats. Instead, he sent a statement: “Given that the Liberal rag Rolling Stone idolizes the Boston bomber, it is no surprise they’d grasp at non existent straws in printing FALSE, and MALICIOUS ALLEGATIONS to try to defame a wounded combat veteran, decorated police officer, and leading candidate in Pennsylvania just like they did to Donald Trump with the Russia Hoax and Brett Kavanaugh on the Supreme Court.”

This isn’t the first time he has allegedly used threats to get what he wanted. Daniels’s ex-wife says that he was “physically and mentally abusive” during their marriage, asking a court in 2013 for a protection order because he “pushed, kicked, and hit” her, “kicked in” a door, and hurt her left forearm so much that he left bruises. The court denied the order because she could not present “the required burden of proof.” The alleged abuse happened a decade prior.

He was also accused of having “engaged in conduct which has been threatening” against a woman he had a child with in the 90s, leaving her feeling “justifiably unsafe.” The court ordered her to keep allowing Daniels to visit their child.

Both women accused him of failing to pay child support, and court records document that he failed to make payments. One court record says that he was fired within six months of starting a job with the Douglass Township, Pennsylvania police department.

In his campaign, Daniels proudly states that he is a former law enforcement officer, but court records show that he was disciplined for “unbecoming conduct by providing deceptive information to an investigator” and “abuse” of “state record for personal reasons,” according to court records.

He also got a letter of reprimand in 1999 for “improper behavior as a matter of habit.”

“I would like you to understand that any future misuse of police information or untruthfulness will be considered grounds for termination,” the police chief he worked for in Bel Air, Maryland wrote in the letter.

Another police department in Minersville, Pennsylvania fired him in 2010 after a confidential hearing due to allegations that were not made public.

Doug Mastriano, the GOP gubernatorial candidate who supports Daniels, has been subpoenaed by the House select committee on the January 6 attack because he was allegedly involved in a plan to send a fake slate of “alternate electors” to cast the state’s ballots for Trump in the 2020 election even though President Joe Biden won that state and Trump lost. The committee also has reason to believe that he was “present during the attack on the U.S. Capitol on Jan. 6, 2021.”

The primary election is scheduled for May 17. An ad from his 2021 Congressional campaign – which he dropped to run for lieutenant governor – is below, and the voice over even calls Daniels “dangerous.”

“There’s nothing more dangerous than a man who wants to be left alone is forced to get involved,” the ad says.