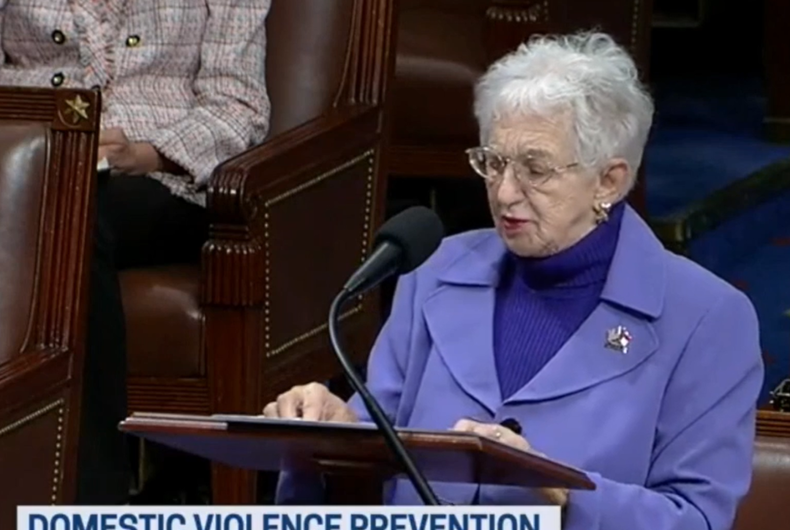 A Republican lawmaker delivered a speech on the U.S. House floor yesterday that blamed domestic violence on President Joe Biden, even though she was speaking against a bill to address domestic violence, citing both protections for LGBTQ people and abortion, which the bill does not address.

Rep. Virginia Foxx (R-NC) told her colleagues in the House that she is voting against H.R. 2119, the Family Violence Prevention and Services Improvement Act of 2021, which amends federal domestic violence law to make some improvements. One of those improvements that she finds repugnant is a measure that requires recipients of some federal grant money to follow anti-discrimination laws and specifically states that it bans discrimination on various grounds, “including sexual orientation or gender identity.”

Related: This prosecutor could get disbarred for refusing to protect LGBTQ domestic violence victims

The law also expands the definition of “underserved populations” to include victims who have trouble accessing services “on the basis of… sexual orientation or gender identity… faith or religious practice or lack thereof.”

“The bill also tramples the rights of faith-based providers by forcing organizations to abandon their sincerely held religious beliefs or give up helping victims through these programs,” Rep. Foxx said in her speech yesterday, referring to how some Christian organizations may lose their federal grants under the law rather than open up their services and hiring practices to include LGBTQ people.

“COVID-19 and President Biden’s failed economic policies have dealt our nation… Government-mandated restrictions and economic challenges,” she said. “It appears those negative outcomes have snowballed to exacerbate an even worse fallout.”

“Evidence suggests that in this pandemic environment, stress due to work, school, substance abuse, and financial struggles have added to more violence in the home,” she said. “Recent statistics show that domestic violence-related homicides have increased in my home state of North Carolina.”

She did not say exactly which statistics she was referring to, but reporting by NC Health News showed that reports of domestic violence in North Carolina increased dramatically in 2020 over 2019, before Biden became president.

Let me be very clear: if you abuse another living being that’s all you. No one else is to blame. We all had stress during the pandemic and most people didn’t abuse anyone or anything. This woman is an embarrassment. https://t.co/CBomjd2Qy9

In her full speech, Foxx said that anti-LGBTQ religious organizations provide “critical care” for domestic violence victims, but they “should not be obstructed from operating” by requiring them to stop discriminating against LGBTQ people.

She stressed that domestic violence should be addressed “at the local level” and that “government cannot always provide the answers” as she argued that discriminatory organizations should not lose access to government funds.

Rep. Foxx also said that she is opposing the bill because it “paves the way for taxpayer-supported abortions. Forcing the public to pay for abortions is morally repugnant and should not be allow to stand in this bill or any bill.”

She was referring to a part of the bill that lifts the ban on some federal grant money being used to pay for health care services related to mental health and substance abuse treatment. Some anti-choice activists have said that they believe this will one day make it easier for Congress to pass other federal laws that could pay for abortions, which is why Foxx said “pave the way” – this bill will not by itself provide funds for abortions.

Allowing federal grant-recipients to use their religious beliefs to refuse service to some domestic violence victims will disproportionately harm LGBTQ people, as much of the litigation in the past decade about religious exemptions to anti-discrimination laws has targeted LGBTQ people.