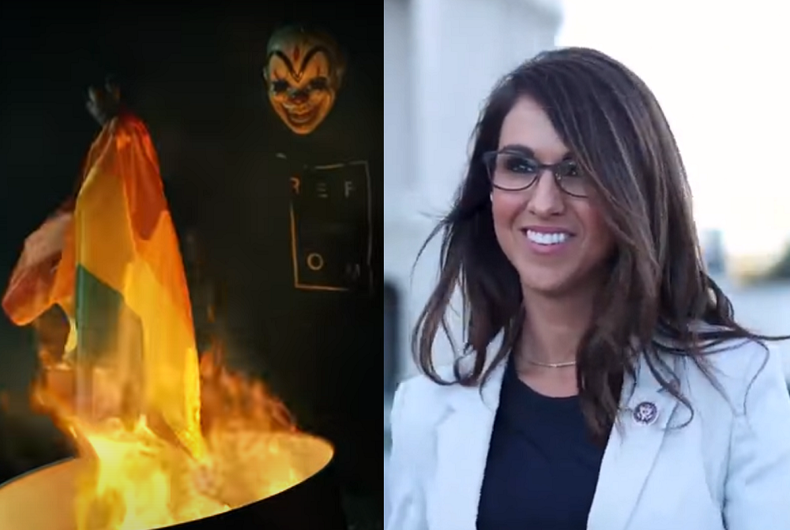 Tyson James is a rightwing rapper who Rep. Lauren Boebert (R-CO) loves so much she spent weeks defending him on Twitter last year. She even recorded a video set to his music to show what a big fan she is of his work.

His latest music video involves burning a rainbow flag, calling LGBTQ people an “abomination,” and pretending that he’s the real victim of people who call out his homophobia.

“He’s so toxic,” James says sarcastically in the introduction for “Toxic.” “Look at how he talks about the LGBTQ community.”

In the background are words like “chauvinist,” “racist,” and “homophobe,” as if they are slurs against him and not descriptions of his actions.

“I ain’t with the LGBQ [sic],” he raps as he spray-paints “abomination” on rainbow flags. “Y’all ain’t gonna make it, believe me you.”

He then pours gasoline on a rainbow flag and lights it on fire.

While the video would just be another attack on LGBTQ people on YouTube if it were made by anyone else, James has friends in high places. Rep. Boebert tweeted about him quite a few times last year when his song “Let’s Go Brandon” was pulled from YouTube for violating the platform’s ban on COVID misinformation.

James and other conservatives believe that “Let’s Go Brandon” sounds like “Fuck Joe Biden.” It’s a way of using an obscenity without actually using it, like saying “I don’t give a fig” or “gosh darn it.”

For your awareness, YouTube has banned the song “Let’s Go Brandon” but “WAP” is still available for your viewing and listening pleasure.

Another censorship fail from the Left.

Patriots rally and put the song at the TOP of the iTunes chart, even beating out Adele.

I’ve got my copy! pic.twitter.com/8icr5P5PtU

Boebert loved “Let’s Go Brandon” so much she made a short music video for it.

Boebert has commented on the new video publicly.