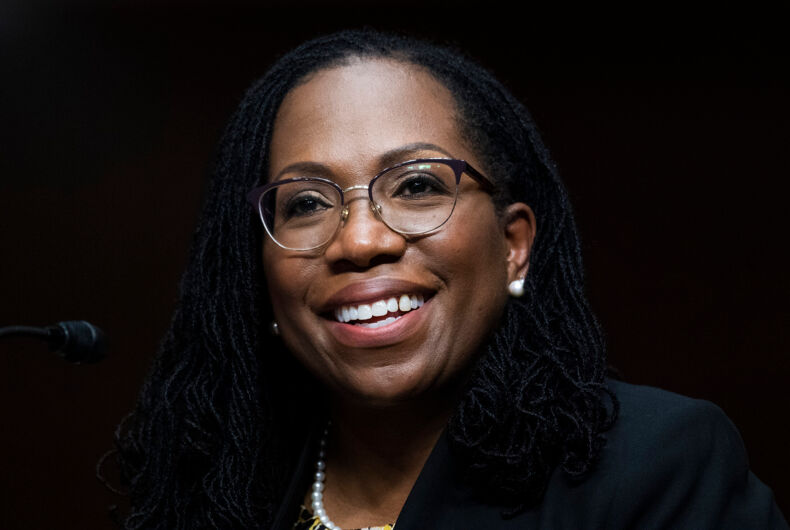 President Joe Biden will nominate Judge Ketanji Brown Jackson to the Supreme Court. If confirmed, 51-year-old Jackson will be the first Black woman to ever serve on the Court.

A statement from the Biden administration called Jackson “one of the nation’s brightest legal minds.”

Related: Which states would end marriage equality if the Supreme Court gives them a chance?

The Human Rights Campaign (HRC) celebrated Jackson’s nomination and released a statement expressing its confidence that she will protect LGBTQ rights.

“The Supreme Court has historically played an outsized role in affirming the constitutional rights of LGBTQ+ individuals and other marginalized communities,” said Interim President Joni Madison. “After a careful review of her record, it is clear that Jackson’s demonstrated fidelity to the principles of our Constitution instills confidence that she will continue Justice Breyer’s legacy as a champion of equality.”

“As such, the Human Rights Campaign is proud to support Jackson to be the newest Associate Justice of the United States Supreme Court. She is an extremely qualified candidate and her confirmation will mark significant progress towards ensuring that those who sit upon our highest court reflect the diversity of the nation whose laws they are entrusted to interpret.”

For the past eight months, Jackson has served on the U.S. Court of Appeals for the District of Columbia Circuit – which is often thought of as the country’s second-highest court due to its many high-profile cases. She was nominated for the seat by Biden, and three Republican senators voted for her confirmation.

Before that, she served on D.C.’s federal district court, to which she was appointed by President Barack Obama. She has also worked as an assistant public defender and a private practice attorney. Jackson also clerked for out-going Supreme Court Justice Stephen Breyer, whose seat she will take if confirmed. Breyer has described her as “brilliant.”

Breyer is far from the only one who has sung her praises. Jackson’s skills have proven to surpass partisanship and impress those on all sides. She is related by marriage to former House Speaker Paul Ryan (R-WI), who has said that her competence and intelligence goes well beyond party.

“Our politics may differ, but my praise for Ketanji’s intellect, for her character, for her integrity, is unequivocal. She is an amazing person,” Ryan said at her 2012 confirmation hearing for district court.

During her consideration for the D.C. Circuit Court, 23 lawyers who clerked for Supreme Court justices of varying ideologies at the same time Jackson clerked there signed a letter sharing their “great respect for her legal abilities, her work ethic, and her ability to work with colleagues of both like and differing views.”

Jackson is also an expert on federal sentencing. She was vice chair of the United States Sentencing Commission from 2010 to 2014. During that time, sentences were slashed for a significant number of federal drug offenses, and sentences were retroactively decreased for many crack cocaine offenses.

This experience, combined with her work as a public defender, makes her a welcome pick for advocates of criminal justice reform. She would be the first ever Supreme Court justice to have worked as a federal public defender.

SCOTUSblog reported that, at her confirmation hearing last year, she spoke about how “struck” she was during her time as a public defender that her clients knew so little about the legal process, even as their lives stood on the line. When she became a trial judge, she continued, she took “extra care” to ensure defendants understood exactly what was happening.

“I think that’s really important for our entire justice system because it’s only if people understand what they’ve done, why it’s wrong, and what will happen to them if they do it again that they can really start to rehabilitate,” she said.

Jackson does not have a record of rulings on the issues that have become the most heated subjects of confirmation hearing debates, issues like religious freedom, race, reproductive rights, and gun control.

During her 2021 confirmation hearings, however, Sen. Josh Hawley (R-MO), questioned her about her previous one-year stint on the board of a Christian school with statement of faith expressing a pro-life and anti-marriage equality stance.

She said she was not aware of the school’s statements on these issues and that she doesn’t “necessarily agree with all of the statements” of the many boards she has sat on.

As a D.C. judge, she is known for rulings on issues related to the power of federal agencies as well as executive power.

One of her best-known rulings came in the case of Committee on the Judiciary v. McGahn, in which she ruled that former Trump White House counsel Don McGahn must testify in front of the House Judiciary Committee.

Jackson wrote in her opinion, “The primary takeaway from the past 250 years of recorded American history is that presidents are not kings. They do not have subjects, bound by loyalty or blood, whose destiny they are entitled to control.” Her ruling was ultimately overturned by a conservative-majority appeals court.

Another notable case in which Jackson was involved was related to Donald Trump’s refusal to release documents related to the Capitol insurrection on the grounds of executive privilege. Jackson joined the opinion of fellow D.C. Circuit Judge Patricia Millet in ruling that Trump could not claim executive privilege and had to turn over the documents, a decision the Supreme Court later upheld.

Jackson was born in Washington D.C., but grew up in Florida. Both of her parents were teachers in public schools before her father became a lawyer and the chief attorney for the Miami-Dade County School Board and her mother became a school principal.