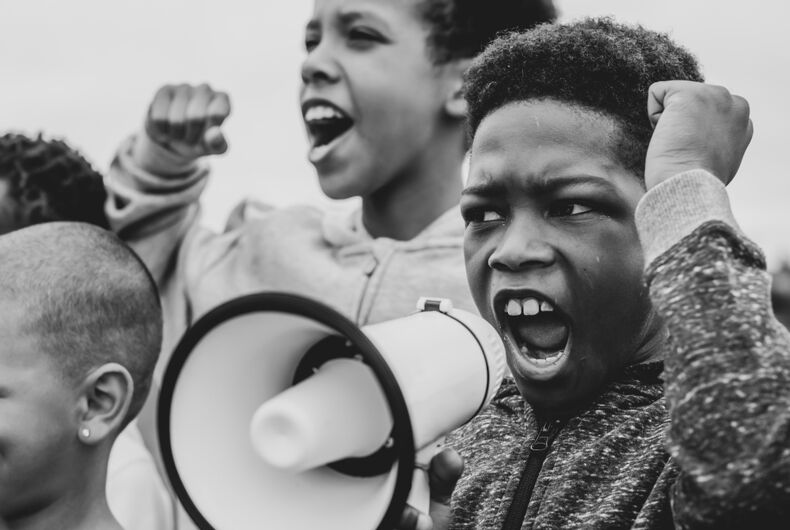 This is an excerpt from Dwayne Ratleff’s new book, Dancing to the Lyrics, based on his life growing up as a Black gay child in Baltimore during the 1960’s. Ratleff is a former special education student who didn’t learn to read or write until he was 11.

When my sisters and I awakened we went downstairs to have breakfast, which we hastily finished. While my sisters transformed our living room into a delivery room, I went upstairs to become pregnant. Sequestered in the bathroom with my garments, I stripped down to my underwear, held a pillow to my belly, and wrapped my sisters’ pink chenille bedspread around my body to make my maternity gown. Its rectangular shape forced me to go strapless, but fortunately, there was enough fabric to allow me a little bit of a train at the bottom of the dress.

Then I fashioned a long sleeve shirt into a wig. It was big enough for me to have shoulder-length plaid hair and bangs. I adjusted the pillow to the proper shape of a pregnancy. Not able to see my feet, my toes searched the bathroom floor for my mother’s mules, and I slid into them.

Gazing in the bathroom mirror, even very lenient eyes would not have called me pretty or pregnant. The most generous of eyes would have seen a potbellied gnome. The only way I could have gotten pregnant was through pillow insemination. I salvaged as much pride as I could after looking in the mirror, grabbed the pack of candy cigarettes and headed toward the stairs.

When I reached the bottom of the stairs, Ibo, our recently pregnant cat had the nerve to give me a dirty look and hiss at me. I responded with a contemptuous stare to inform her that I was about to put her to shame. My gestation period was only going to be a few minutes long, and the birth would not be as messy as hers had been. Had it been a real birth I would have chosen to do so on the armchair covered in plastic and cigarette burn marks. Instead, I had chosen to give birth on the couch.

I stepped into the dining room, placed the back of my right hand against my brow and announced dramatically, “I think it’s time.”

My sisters, Peanut and Gwen my were real gentlemen. Each took one of my hands, imitated the sound of sirens and escorted me the last few feet to the couch in the living room. They proved to be quite inventive. Two chairs from the dining room sat in front of the couch. They would serve as the stirrups to support my legs during labor. Our mother’s meat loaf pan was at the foot of the couch. I thought it was a bit small for a bassinet, but they explained it was for the fictitious afterbirth. My sisters must have paid more attention to the book than I had and planned on more of a realistic birth than I was prepared to perform. I had not packed a placenta under my pink chenille maternity gown. It was not that type of pregnancy. Nor were my sisters that type of nurse or doctor.

They fell short in the execution of their costumes. Gwen had made herself a paper boat, which we pretended was a nurse’s hat. Peanut had a saucer from a toy teacup set rubber banded to her forehead. I feared it would cut off the circulation to the upper part of her brain at a critical point in the procedure. Despite my minor concern, and no matter how hard I pretended, all I saw was a coal miner.

Before they helped me onto the couch, I pulled the pack of candy cigarettes from my nonexistent cleavage and handed them each one. It was 1968, and no one did anything important without having a cigarette before or after the event. As I was acting the part of the lady, I would have mine after giving birth.

Fortunately, when I had made the dress, I left a slit in the appropriate place. I had plenty of room to part the dress and easily sat on the couch. I gracefully rested my mules on the seats of the dining room chairs.

By this time my sisters each had a candy cigarette dangling from their lips. Gwen sat at the top of the couch. She blew powdered smoke toward the ceiling while using a damp sponge to cool my brow. She looked tender and caring. Peanut, on the other hand, was kneeling between my legs and blew her powdered smoke toward my cloth womb, almost as if she were trying to smoke out a nest of bees. With a cigarette dangling from her lip, she looked more akin to a mechanic under the hood of a car than a doctor. The expression on her face said, “Looks like everything needs to come out.”

I let out a dainty, anemic little mew that was supposed to be a grunt. Peanut, not satisfied with my performance, pinched my thigh. There was not bit of testosterone in the scream that followed. I looked down between my legs and saw her give me the thumbs up.

She said, “That’s more like it. You needed to put some soul into it.”

Apparently, she wanted me to give birth and perform like James Brown. Although the dance would not come out for another year and was not by James Brown, I commenced the prone version of the Funky Chicken. My head made a pecking motion while my arms flapped with no destination in mind. I groaned and moaned loudly through gritted teeth. Giving the performance of my life, I twisted and convulsed to the point that one of my mules fell off my foot.

The wig I had made from a shirt was tight, hot and making me sweat. Gwen kept on patting my forehead with the damp sponge. But Peanut was rushing the birth. Push became pull as I gripped the top of the pillow to prevent Peanut from causing me to give birth prematurely. I grunted in earnest as my delivery had now become a tug-of-war. With gravity on her side, Peanut was gradually winning that war. I resorted to closing my legs, locking her head between my knees to get her attention. The sudden pressure was sufficient enough to pop the candy cigarette out of her mouth. I retrieved another cigarette and informed her I wanted to have a more laborious labor.

Gwen stopped patting my forehead until I gave her another cigarette as well.

I gave an Academy Award performance, worthy of an Oscar. It would not have been a surprise if a replica of the gold man had emerged from my chenille gown instead of a pillow. But Peanut broke the mood with a final pull.

She retrieved a towel I had not noticed from under the chair, wrapped the pillow, then handed it to me and said, “Mrs. Cole, you have a lovely little girl.”

Holding the pillow in my left hand, I retrieved a candy cigarette from my cleavage with my right. With a great sense of accomplishment, I blew powdered smoke into the air. All three of us had candy cigarettes dangling from our lips when we heard a sound coming from the door to the dining room.

We looked up and saw our mother standing in the doorway. From the look of consternation on her face, she must have witnessed quite a bit of my performance. Her eyes had been overwhelmed. Before her was a son who had just given birth dressed in a homemade chenille gown, wearing her mules. In addition, all three of her children were huffing on realistic candy cigarettes pulled from the box in her son’s cleavage.

There were far too many issues to address in one day. My mother turned around and walked out of the room. I sensed we had done something untoward and said to my sisters, “I don’t think we should play this game anymore.”
My mother didn’t mention the incident again until twelve years later when I told her I was gay and she responded, “Yes, I know you are.”

She laughed and proceeded to describe in vivid detail the birth of her first grandchild all those years ago.