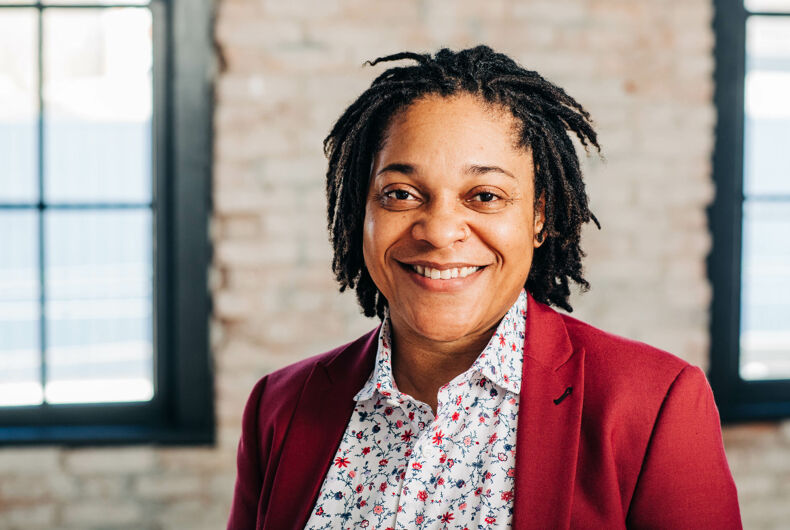 Democrat Keturah Herron has a reputation for getting things done. A longtime activist and social justice advocate, she is currently running to become the first out LGBTQ person ever elected to the Kentucky state House of Representatives.

“I identify as a Black, queer, masculine-presenting woman who has been directly impacted by the criminal legal system,” Herron told LGBTQ Nation. “I really believe that it’s all of those different identities that makes me qualified and makes me allowed to stand in space and advocate and write policies for things I know will help our community.”

Related: Ashanti Martinez wants to be the gay Afro-Latino voice his community needs

A former policy strategist for the ACLU, Herron was largely responsible for the unanimous passage of Breonna’s Law that banned no-knock warrants in the city of Louisville – where 26-year-old Breonna Taylor was killed by police after they forcibly entered her apartment with a no-knock warrant.

Herron also contributed to getting a version of the law passed at the state level that places limits on the use of no-knock warrants across Kentucky.

She hopes a victory for her will inspire LGBTQ young people, whether they are second graders or college students.

“We do this work on a day-to-day basis knowing we’re just here to plant seeds and get us further along, but it’s going to be the people who come behind us who are going to be the ones to make the change we really want to see.”

SB4, a version of #BreonnasLaw was signed today in KY. Today has been filled with many emotions. I ended the evening at the Promise Witness Remembrance exhibit. #BreonnaTaylor has forever changed me. I will keep applying pressure for her beautiful soul. pic.twitter.com/fIa4rYDty7

Herron is running against Republican Judy Stallard in a special election in the state’s 42nd district. The election came about after the current Rep. Reginald Meeks (D) announced his retirement.

Meeks announced his retirement in December, so Herron had to make a quick decision to run. She had been thinking about running for office for a long time and had even gone through a training program for Democratic women.

“I looked back at the life I’ve had, the advocacy work I’ve done, my life experiences…[and I realized] this aligns. So I decided to say, ‘yeah I’ll run and make this happen.'”

In office, Herron hopes to focus on voting rights, a cause she has already spent years championing, as Kentucky is one of only three states that permanently bans those with felony convictions from voting. Herron wants to change that.

“It’s part of our constitution,” she explained. “So we would need to get a new piece of legislation passed for the people of Kentucky to vote on.”

She also hopes to create a state office of violence prevention that would address gun violence, domestic violence, suicide, and child abuse as public health issues.

“I believe that we’re seeing a tremendous amount of violence, not just locally but across the nation, and I believe we have to look at that from a public health standpoint.”

This is gross!! @RepBeatty deserves better. Kentuckians deserve better. Our nation deserves better. We must activate a different base, teach each other the political process, and start embodying the world which we envision. https://t.co/zfpYYolR9U

Herron also discussed Kentucky’s lacking statewide protections for LGBTQ people. She plans to work with the Fairness Campaign – a state LGBTQ advocacy organization that has helped 22 Kentucky communities pass anti-discrimination ordinances – to continue fighting “for full fairness across the state.”

“If we don’t get fairness statewide, [we must] continue to do the work in smaller communities,” Herron said.

From her years of work as an activist and advocate, Herron has learned that getting things done means being willing to have conversations with people you may not normally sit down with.

“I’m really hoping to bring in an energy that we can get away from party politics and really start talking about issues and values of people. That’s how I’ve been able to be successful…When it came to Breonna’s Law, I talked about the value of human life.”

And it worked. Breonna’s Law not only passed the Louisville Metro Council unanimously, but it did so in just 17 days.

In these final days leading up to the election, Herron said she is feeling good. She has been working hard knocking on doors, doing radio ads, and appearing in podcasts. Now, it’s up to the voters.

“Being out to see people and see their excitement has been amazing,” she said. “I feel good. I think we’ve done everything we can in a short period of time.”

Herron is also running in District 42’s general election; the primary will take place on May 17.

It’s super dope to get mail reminding me to vote for ME! This process has been very humbling. I am so thankful for all of the support I have gotten. This entire experience has been a win. I look forward to getting to work for the people of HD42 and all Kentuckians. pic.twitter.com/GBPQ3ahRWE