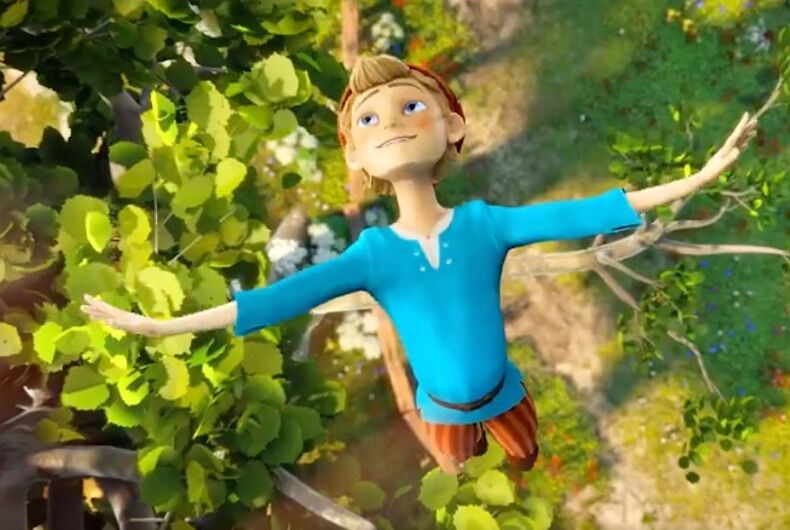 Sometimes you just have to express yourselfPhoto: Screenshot

The latest re-telling of Pinocchio has social media users wondering… did Lionsgate make the iconic character gay in their upcoming animated film?

Because after watching the trailer, the internet seems to believe that the yassification of Pinocchio has begun thanks to actor Pauly Shore’s voiceover.

Related: The number of adults who identify as LGBTQ has doubled in the past 10 years

While the trailer starts out like many other children’s movie trailers do – and manages to work in a Teenage Mutant Ninja Turtles joke – once the puppet speaks, viewers are left wondering something they likely had never considered. Is Pinocchio gay? And when does it come out? Because in the trailer, the puppet wants a girlfriend.

“gay pinnochio is not real he cannot hurt you,” another pointed out.

But one user had the most astute observation of all. “Everyone going crazy over gay pinnochio are missing that immediately before the meme clip happens, the trailer actually starts with a ninja turtles reference.”

Over on TikTok, the fun continued with users posting videos of themselves lipsynching Pinocchio’s big opening scene. The meme took over the platform and Shore shared some of his favorites on Instagram.

“I’m so flattered with all the cute TikTok videos that all you sweet people did. I literally cried when I saw them. Shed a big tear,” he posted with a video mashup. “If you stoners haven’t seen these fabulous TikTok videos, let me know what you think of all my new friends. They’re so adorable, don’tcha think? Yes, Pauly Shore is the voice of Pinocchio. Yeah dooooooodz.

Even Lionsgate joined the fun, posting on TikTok about the “yassification of Pinocchio.”

“I didn’t know it was going to go viral,” Shore told Rolling Stone. “I was in the West Hollywood Cub Scouts as a kid. [I’ve] been around the gay community my whole life.”

“You go into different projects and you don’t know what’s going to happen,” he said. “I go into it with my heart and my soul and trying to have a good time. I didn’t know it was going to go viral.”

I can't wait till gay Pinnochio *comes out* in theatres pic.twitter.com/XN5ruPWNPf

gay pinnochio is not real he cannot hurt you https://t.co/Az1IgVlQzz

E-everyone else is knees deep in the gay pinnochio thing right??

Why this remind me of gay pinocchio pic.twitter.com/fT7WiLrDVd

"speaking of gay, have you guys seen the new Pinnochio movie?" – marisol

Everyone going crazy over gay pinnochio are missing that immediately before the meme clip happens, the trailer actually starts with a ninja turtles reference