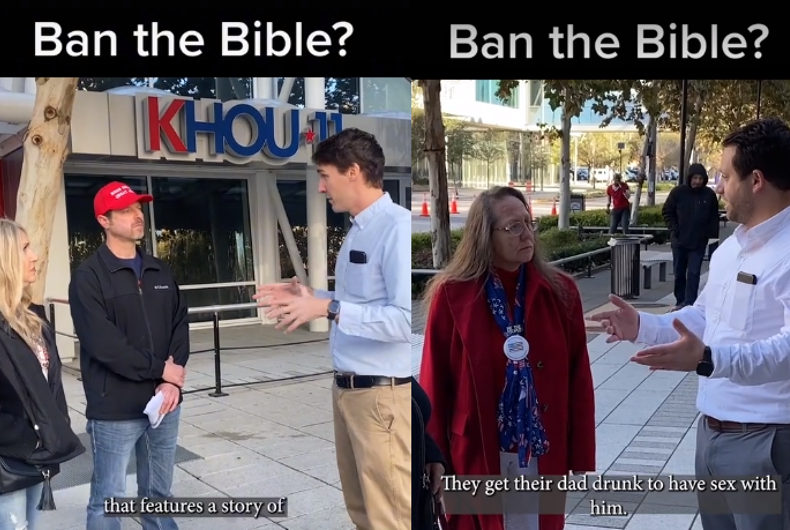 The Good Liars explain why the Bible should be bannedPhoto: Screenshot

Republicans nationwide have been trying to ban LGBTQ-themed books from public schools because they see the books as pornographic and overly sexual, while books containing straight sex and relationships have been taught for decades without raising any eyebrows.

So to illustrate the hypocrisy, Jason Selvig and Davram Stiefler — a comedy duo known as The Good Liars — got supporters of former President Donald Trump to agree to ban Bibles from schools as well.

In a TikTok video that has since been viewed 5.8 million times, Selvig tells a blonde woman and a man wearing a red MAGA cap, “There’s a book we’ve seen that’s in libraries in lots of schools that features a story of two daughters having sex with their dad.”

The video then cuts to Steifler explaining the story further to two women.

“Oh my god,” one woman replies.

The video then cuts back to Selvig who asks the woman and the man, “Should a book like that be in a school?”

The couple repeatedly say “No.”

“Just get that out of the school?” Selvig asks.

“Why do kids need to read that?” the man says.

The video then cuts back to Stiefler who says, “That book is actually the Bible.”

In response, one woman dismissively says, “Oh no, no, no,” and laughs.

The Bible story in question is the story of Lot and his daughters from the book of Genesis, chapter 19, verses 30 to 38.

In the story, the three live in a cave. One daughter says to her sister that since there are no men around to impregnate them, they should get their father drunk and have sex with him to “preserve our family line through our father.”

They then successfully get their father drunk two nights in a row, have sex with him and then end up pregnant. The story claims that the father was so drunk that he was unaware of what happened both nights.

We were surprised to hear that these Trump supporters wanted to ban the Bible in schools. #fyp #funny #texas #school #bible #ban #comedy

Mentioning the recent conservative love of book banning, Selvig and Stiefler told Newsweek, “We wondered what conservatives would say if they heard stories without the context of the rest of the book. Would they want the Bible banned from school libraries?”

“It feels like there is a lot of denial and a double standard happening with these discussions of book banning,” they added.

To be clear, the Bible says all sorts of horrifying things. It says to kill people in same-sex relationships, to kill women who have had pre-marital sex, to smear animal feces on the faces of lazy priests, and that it’s okay to own and beat slaves.

Compared to books that say it’s alright to be queer, the Bible seems downright ghastly. Of course, conservatives will never admit that.