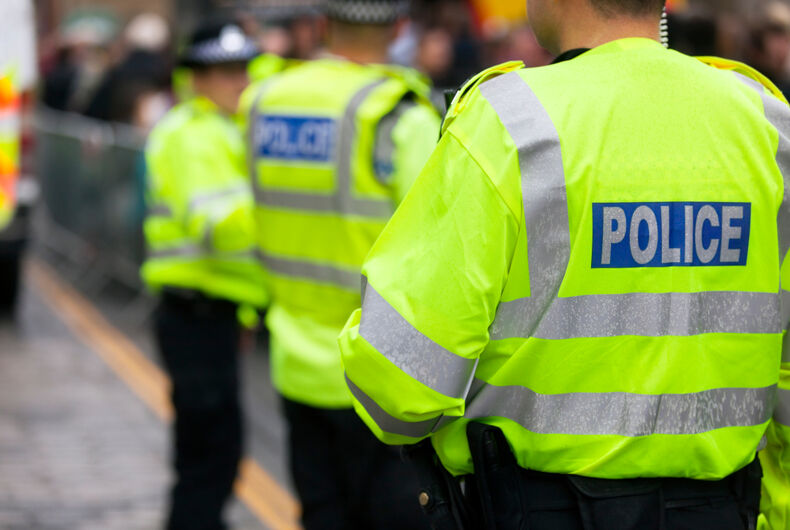 A new report has found Metropolitan Police officers in London made homophobic and racist comments over the messaging app WhatsApp, while also joking about raping and beating women.

An independent police watchdog made the discovery after reviewing thousands of messages exchanged by officers, many of which they found to be “highly sexualized, discriminatory, or referred to violence,” and which were “generally described as banter by officers.”

Some of the messages include officers discussing slapping their female partners, saying “it makes them love you more,” and joking that their “dad kidnapped some African children and used them to make dog food.” They also show officers calling one another “benders.”

The Operation Hotton Learning report from the Independent Office for Police Conduct (IOPC) was published on Tuesday and involves officers mainly based at Charing Cross Police Station between 2016 and 2018.

IOPC regional director Sal Naseem said the report is “shocking and contains language which is offensive,” advising that “some may find it upsetting.”

“However, we felt it was important to provide the context for the public, the Met and other forces, for why such hard-hitting recommendations are necessary,” they added.

The text messages, which show “pervasive evidence of “demeaning and intimidating actions” within the force, come from a WhatsApp group involving 17 officers. The report says “malicious comments were a frequent part of the bullying,” while discriminatory, sexualized, or violent comments were frequently dismissed as “laddish banter.”

Some of these “banter” messages include officers sending homophobic messages reading, “you fucking gay” and “fuck you bender,” an anti-gay slur in the U.K. They also brag about domestic violence against their romantic partners with messages like, “Knock a bird about and she will love you. Human nature. They are biologically programmed to like that shit.”

The report found evidence of bullying directed towards new officers still on probation “such as beckoning them with a bell, and threats to cut their hair and belongings,” as well as other “officers being shouted at by supervisors, and women being sexually harassed or treated as a ‘weary female’ when speaking out about the behaviors of male colleagues.” Furthermore, one male officer threatened to “rape,” “chloroform,” and “hate fuck” a female officer.

Messages were sent “about police officers attending a festival dressed as known sex offenders and a molested child,” alongside several comments about “raping” each other.

Racist exchanges referred to Somalian people as “rats,” Black people as “robbers,” and disabled people as “spastics” and “retards.”

The IOPC says the incidents highlights in the report are “not isolated or historic,” with the officers’ behavior falling “well below the standards expected of the officers involved.”

Naseem said: “While these officers predominantly worked in teams in Westminster, which have since been disbanded, we know from other recent cases that these issues are not isolated or historic.”

He said he “welcomed” steps taken by the Met to address these issues within the police, such as its Rebuilding Trust plan that focused on standards, culture and women’s safety. However, he insists that isn’t enough and “more is required.”

Therefore, the report sent out 15 recommendations to “tackle underlying cultural issues by preventing environments from developing in which unprofessional and inappropriate behavior can thrive and go unchallenged.” These recommendations include for the Met Police to “publicly commit to being an anti-racist organization with a zero-tolerance policy towards sexism, misogyny, bullying, and harassment.”

“Our recommendations focus on the identified cultural issues and aim to ensure that those who work for the force feel safe with their colleagues and that communities feel safe with those whose job is to protect them,” said Naseem.

According to the IOPC, two officers were dismissed during the investigation for gross misconduct and barred from future employment within the police. Four officers attended misconduct meetings and a fifth was supposed to do the same, but they resigned first. Two officers received management action and another officer received practice requiring improvement.