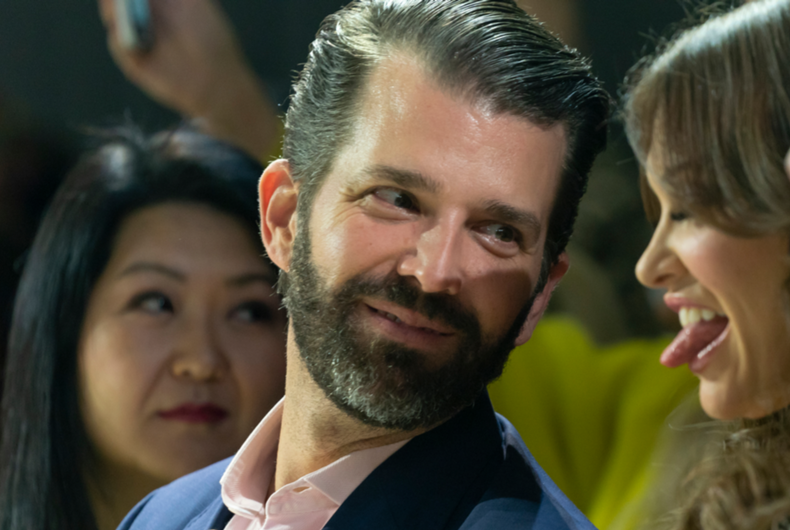 The GOP may position itself as the party of “family values” and conservative Christianity, but one of the party’s loudest voices is urging young conservatives to go in the opposite direction.

Following the teachings of Jesus has “gotten us nothing,” according to Donald Trump Jr. Instead, he thinks Republicans should embrace cancel culture.

Republicans are generally known for marching in lockstep with each other compared to Democrats’ constant splintering and infighting. Speaking at a Turning Point USA conference, Trump Jr. told the young activists they are on the “frontline of freedom” and urged them to “band together.”

“And if we band together, we can take on these institutions,” he insisted. “That’s where we’ve gone wrong for a long time.”

“They cannot cancel us all,” the former president’s son said. “This will be contrary to a lot of our beliefs because I’d love not to have to participate in cancel culture. I’d love that it didn’t exist. But as long as it does, folks, we better be playing the same game.”

Republicans should stop turning the other cheek as Christ commanded, he said. Conservatives have been playing tee-ball while liberals play “hardball.”

Commonly known as the “love your enemies” instruction from Jesus, the direct commandments are one of the backbones of Christianity.

You have heard that it was said, ‘Eye for eye and tooth for tooth.’ But I tell you not to resist an evil person. If someone slaps you on your right cheek, turn to him the other also; if someone wants to sue you and take your tunic, let him have your cloak as well; and if someone forces you to go one mile, go with him two miles. Give to the one who asks you, and do not turn away from the one who wants to borrow from you.

Around the nation, evangelical Christians have stormed school board meetings, demanding that lessons on LGBTQ issues or racism be banned or canceled. They spent the years that Donald Trump was in office denigrating the poor and immigrants and actively trying to harm the elderly and children.

While Trump Jr. might be blatant in his rejection of Christian values, Republican MAGA supporters and the religious right abandoned them long ago.