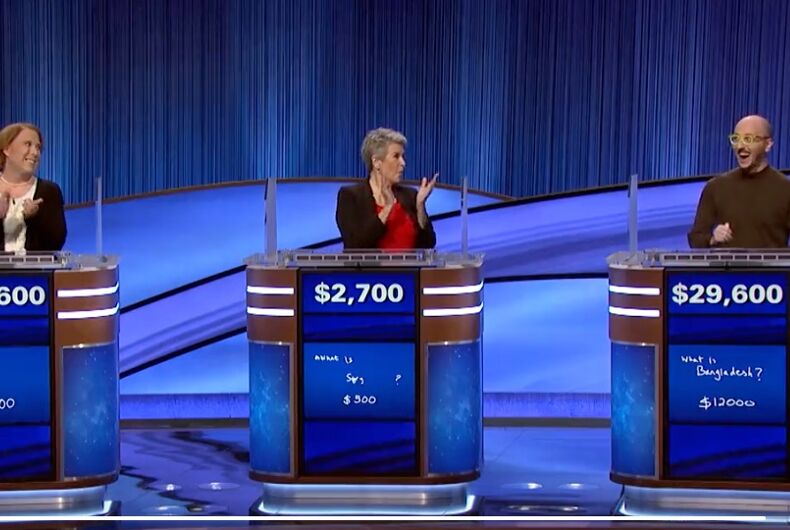 Jeopardy! contestant Amy Schneider, the transgender woman who made history as the first woman to break a million dollars in winnings, lost last night to a queer librarian from Chicago. Schneider is the top female contestant in the show’s 38-year history.

Rhone Talsma overtook Schneider after a tough game, allowing him to end her 40-game winning streak before she could unseat current co-host Ken Jennings as the show’s all-time champion.

“It’s really been an honor,” Schneider said after the game aired. “To know that I’m one of the most successful people at a game I’ve loved since I was a kid and to know that I’m a part of its history now, I just don’t know how to process it.”

While Schneider had previously dominated the board, making it impossible for the other players to win in the end, the game became more competitive when Talma hit a Daily Double during the Double Jeopardy round. Talma answered the Final Jeopardy question correctly, while Schneider did not come up with an answer.

“I’m still in shock,” Talsma said. “This is my favorite show … I was so excited to be here, and I just wanted to do my best. I did not expect to be facing a 40-day champion, and I was excited to maybe see someone else slay the giant. I just really didn’t think it was going to be me, so I’m thrilled.”

Schneider has been on the show since November 17, when she won during Trans Awareness Week, and she has proven victorious in every episode to air since.

She recently shared a heartwarming story about how her role on the game show helped an 83-year-old man become more accepting of trans people.

“Amy Schneider has given Jeopardy!‘s nine million plus nightly viewers a historic 40-game run full of masterful gameplay, while her media interviews and Twitter recaps of each game have given fans a glimpse into her life as a smart, charming transgender woman with a girlfriend and a rescue cat named Meep,” Nick Adams, GLAAD’s Director of Transgender Representation, said after the game aired.

“Her visibility has been a bright spot, allowing millions of people to root for her success and start conversations about being transgender at a time when proposed bills in states like Arizona, Iowa, Indiana, Oklahoma, South Dakota, and Amy’s home state Ohio, are targeting transgender Americans for discrimination. Amy’s achievement will be celebrated for years to come by Jeopardy! fans and LGBTQ people everywhere.”

Anything can happen in Double Jeopardy! … if you're bold enough to bet big. pic.twitter.com/TV8ZVm7yxx