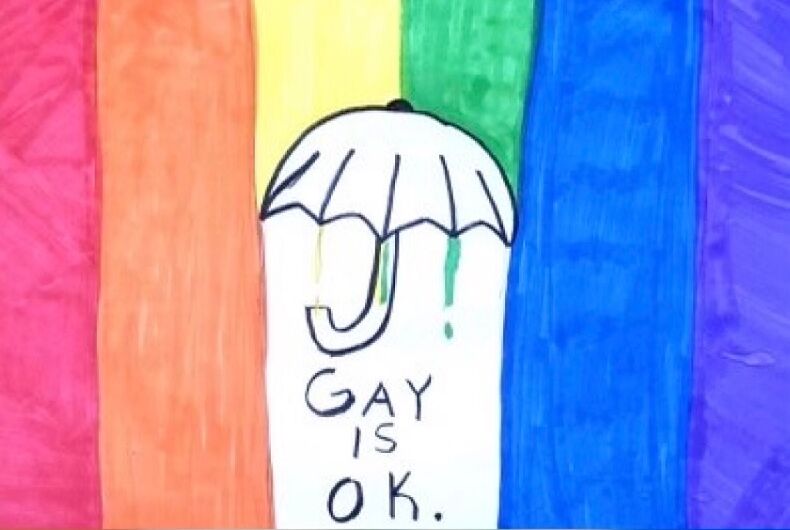 An elementary student’s artwork celebrating LGBTQ people was removed from a classroom in Georgia after a school administrator allegedly compared it to a Nazi flag.

Now parents and teachers are speaking out against this discrimination, which took place at Clarke County’s Oglethorpe Avenue Elementary School.

Related: Minnie Mouse is going to wear a pantsuit & OMG conservatives are upset about it

The artwork in question depicts a rainbow with the words “Gay is OK” written in the center. Administrators took it down from a classroom display after a parent reportedly complained. Parents say the administrator who removed the artwork told the teacher it was similar to hanging a Nazi flag .

An anonymous teacher released a statement to local news station WXIA denouncing the school’s actions and emphasizing that Oglethorpe is an accepting place.

“On behalf of a majority of the staff at Oglethorpe Avenue Elementary School, we are disheartened that these words and actions have happened in our school building during this time. This does not represent why we chose this profession, and it does not represent the feelings, beliefs, values, and attributes our amazing school family has within these four walls.”

The teacher also expressed disappointment that nothing has been done to fix the situation or “rectify the divide that has been caused.”

“We will continue to seek resolution,” they said, “and promote a community of love, acceptance, and tolerance within our building and community.”

Parents also say this is not the first time the school administration has been discriminatory.

Gee Campbell, a parent who is non-binary and transmasculine and whose daughter is in the classroom where the artwork was taken down, is worried about its effect on her.

“We’ve been part of this school community for four years,” Campbell said. “My experiences with the teachers in regards to my transitioning have always been positive and respectful.  My daughter is in this classroom and my immediate thought was ‘What message does this give my daughter about her family?'”

A statement released from the school district stated that the situation is being investigated and that “we condemn this comparison [to Nazi symbolism] and discrimination in all its forms.”