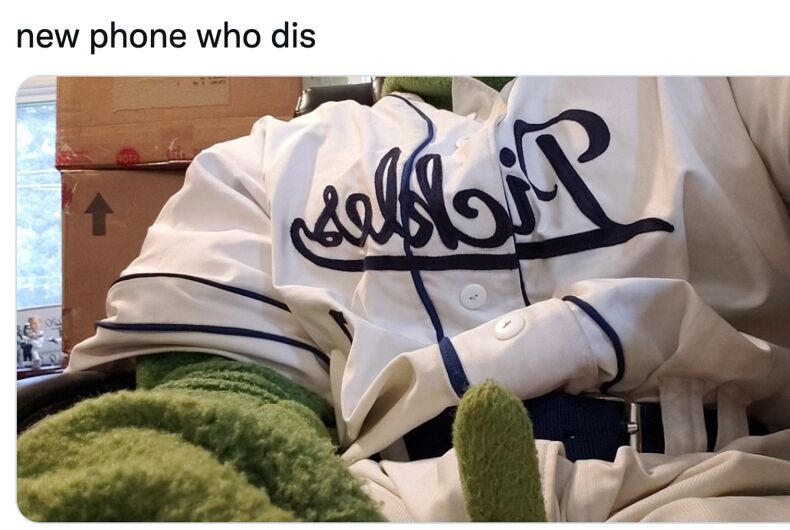 The Portland Pickles mascot has caused a scandill.Photo: Twitter

The Portland Pickles mascot, Dillon, is a little spicy. And he’s definitely not a gherkin.

During a Twitter takeover, Dillon’s first tweet caused some scandill when it appeared he tweeted out a dick pic.

Related: Meet the oldest bisexual in the world

“new phone who dis,” Dillon tweeted along with a photo that appeared to be, well, Dillon’s bread and butter.

The perky pickle made sure to tag some curious users with his tweet: Manscaped, Steak-umm, Oscar-Meyer, Corn Nuts, and out California Sen. Scott Weiner (D).

But when things turned sour, Dillon claimed it was his thumb and not his spear.

Major outlets worldwide covered the wardrobe malfunction, relishing in the mascot’s jarring experience – and the team quickly acknowledged how seriously they were taking the photo faux pas.

“We will continue our internal investigation and will likely release the findings tomorrow (1/14). We assure you that we are hard at work to get to the bottom of this and it is a big dill to us,” the team tweeted in a thread that included all of the breathless news accounts of the pickle’s peccadillo.

Minor League Baseball teams have silly names and mascots meant to give them “hometown flavor.” But from the Richmond Flying Squirrels to the Rocket City Trash Pandas, the teams cash in on the names and publicity stunts. After rebranding the team as the Trash Pandas, the franchise made over $4 million in merchandise sales before playing their first game under the new moniker.

And the Pickles are no exception. Two days after the internet exploded, the team announced they were selling T-shirts with the mascot giving a thumbs up.

You weren’t supposed to see this

Jan. 13th UPDATE: our mascot, Dillon T. Pickle, has released the following video statement regarding yesterdays scandill. You may be SHOCKED at his response: pic.twitter.com/v6ejPM5XoM

BREAKING: Dillon has released t-shirts so he can hire a private investigator to clear his name. #ISTANDWITHDILLON
Show your support: https://t.co/dI8N30OTr5 pic.twitter.com/FWmItyMQhk

We have ended our mascot takeover. It’s come to our attention that this photo can be misinterpreted as a disturbing image. Dillon would like to go on record and say that he was trying to give his fans a thumbs up. https://t.co/5VUgkhieq2