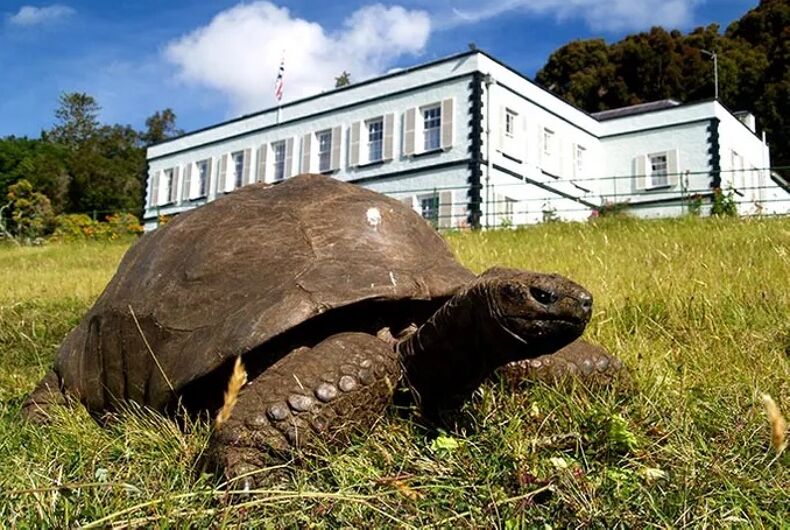 The oldest bisexual in the world is about to turn 190-years-old (although he may be even older). He’s so old, in fact, he’s made the Guinness Book of World Records. He’s the oldest land animal on Earth.

Jonathan, a blind tortoise that can’t smell, lives on the South Atlantic island of St. Helena on the grounds of the governor’s mansion along with three other giant tortoises. And when it comes to his partners, Emma and Fred, Jonathan’s libido isn’t slowing down.

Studies have shown that male tortoises regularly have sex; they’re not particularly picky and will even have sex with an empty shell. Their willingness to copulate easily and frequently is seen as an evolutionary advantage.

But elderly Jonathan, who arrived on the island in 1882 and was already fully grown and assumed to be around 50-years-old, won’t be going nuts for his big day. Cabbage, cucumber, carrots, apples, and lettuce hearts will be on the menu. Since he can’t see or smell, he’ll be hand-fed by his personal veterinarian.

For some reason, the oldest chelonian on the planet was given the birthday of February 7, 1832 on Wikipedia. It amused the locals so much, they adopted the date and celebrate Jonathan’s birthday every year now despite noting that there are no records and he could be even older.

Is a serial killer that targeted gay men still alive in San Francisco?