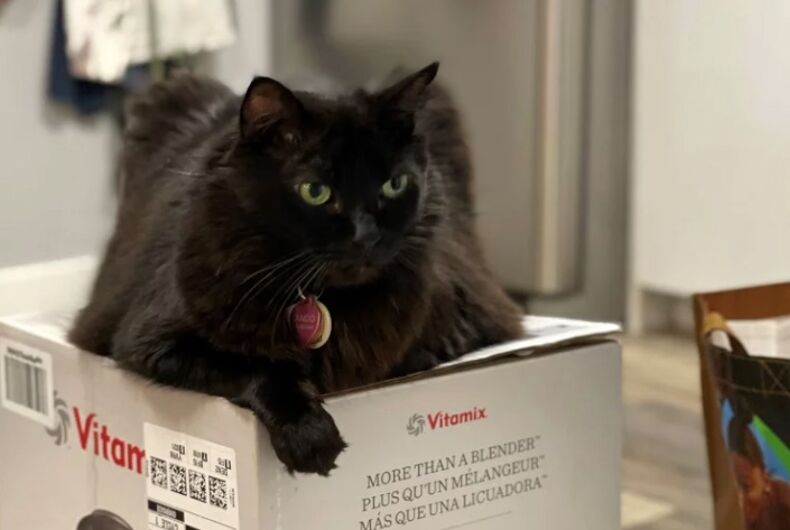 One of the couple's cats sitting on the blender boxPhoto: Jessica Gerson-Neeves's Facebook

The three house cats of a lesbian couple have been holding the couple’s blender hostage since before Christmas. The felines alternately fight, scheme and betray one another to sit on the blender’s highly coveted cardboard box.

The couple has been sharing images and updates from the hostage situation on their Facebook, bringing some lightness and levity to people who need it.

Related: Pee Wee Herman & Ginger Spice will star in an animated film about a transgender fish

Jessica Gerson-Neeves and her wife bought the Vitamix blender in a Black Friday sale and received it on December 16, 2021. But ever since Gerson-Neeves put the box on their kitchen floor, their cats began sitting on it like some sort of throne.

The couple has since posted regular updates from the cat saga, “like dispatches from the front lines of a high-stakes battle, documenting the trio’s every move and their humans’ unsuccessful attempts to disrupt them,” NPR wrote.

Related: Twitter banned Drag Race’s Aja after she was attacked & misgendered by feminists

The couple began issuing updates from the saga after Max first claimed the box. Gerson-Neeves took a picture and shared it in a cat lovers’ Facebook group. By the next day, nearly 10,000 people had interacted with the post, she said.

She then wrote in the comments that she would provide regular updates on the ordeal. Those updates have led her cats’ Facebook page to grow from 64 followers to over 25,000.

To attempt to lure her cats off of the box, she had Vitamix send her three empty decoy boxes that she filled with laundry. Facebook commenters have also suggested that she tunnel under her kitchen and secretly remove the blender from the bottom of the box without her cats knowing.

Granted, the couple could easily pick up the cats or shoo them away from the box, but Gerson-Neeves said there’s no real need. “It is silly and ridiculous and very low stakes and not an actual problem and just something that people can laugh at.”

The laughter is especially needed right now as the economic situation and pandemic both worsen amid the dead of winter. Her Facebook commenters have included seasonally depressed people, exhausted health care workers and others who just need a laugh.

“Everything is so overwhelming and so painful right now,” she said. “People are desperately in need of things they can just laugh at.”

Two chemicals in marijuana could help prevent COVID-19, but there’s a catch