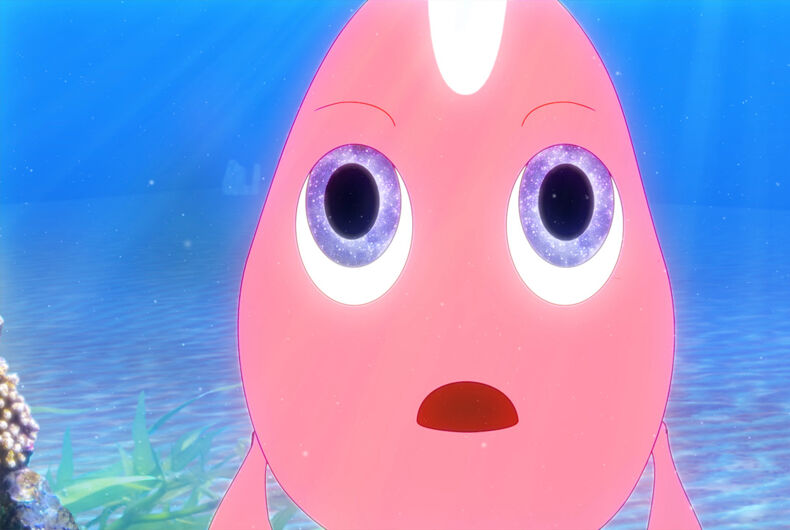 Paul Reubens will star as Oliver, a young male fish prince destined to be queen.Photo: Screenshot

Actors Paul Reubens, Gerri Halliwell, and Tatum O’Neal will join a host of transgender actors in an animated film about Oliver, a transgender fish prince destined to be queen.

Queer filmmaker JB Ghuman, Jr.’s The Crown With A Shadow is based on the real-world Pink Skunk clownfish.

Related: In 1636, Massachusetts tried to ban lesbianism. But we’re still around.

The amazing tropical fish swims in schools headed by a large dominant female with a secondary male “breeder” fish that is larger than all the other males. When the ruling female dies, the breeder fish turns into a female and the next largest male steps up the fish hierarchy to become her companion.

“I’m a science junky and when I first learned about the Pink Skunk Fish and how its colony is headed by an alpha female that actually morphs from its original male body, it reminded me of the celebration of identity we are experiencing today in our own species,” Ghuman said.

“Throughout our natural world, hermaphroditism is actually quite common and beautiful and so it’s not only kind to accept the transgender community, but natural to do so.”

“When [Ghuman] asked me to be part of this project, I jumped at it,” Reubens said. “In the way the film illustrates how infinitely rich and complex life is, perception is a force to be reckoned with.”

Reubens will play Oliver. Halliwell will play his mother, the female destined to die. O’Neal portrays a shark that bullies Oliver.

“Grown-ups can learn a thing or two from the story of Oliver,” Ghuman says. “This film should be mandatory viewing for everyone and their pets.”

The film premiers at LA’s OutFest film festival this week and will be available for virtual screening Aug 16-18.