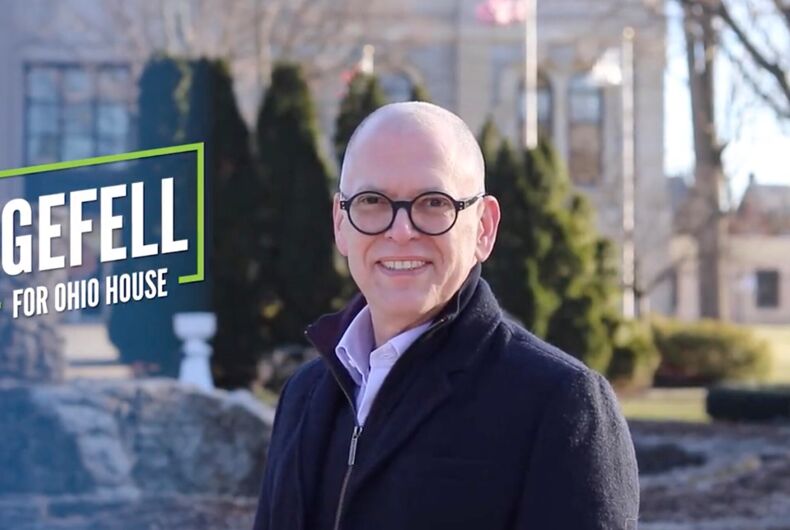 Jim Obergefell, the lead plaintiff in the landmark Supreme Court case that legalized marriage equality in all 50 states in 2015, has announced he is running for state representative in Ohio’s 89th district.

“We should all be able to participate fully in society and the economy, living in strong communities with great public schools, access to quality healthcare, and with well-paying jobs that allow us to stay in the community we love, with the family we care about,” he said in a statement.

The 89th seat is currently held by Republican D.J. Swearingen.

In a video announcing his candidacy, Obergefell declared that he doesn’t mind being the underdog, and said he is “not afraid to take on any issue when it’s the right thing to do.”

He said he will bring the same “fighting spirit” he brought to the Supreme Court as a state representative.

“Some people underestimated me and my fight for marriage equality, and that was a mistake,” he said. “You deserve to have someone in the state house who will fight for you to create good jobs, great schools for all kids, access to quality health care for everyone, and a clean, healthy Lake Erie.”

I’m Jim Obergefell, and you have my promise that I will work hard every day to improve the lives of everyone in Ottawa and Erie counties and all of Ohio. To watch the full video and learn more about my campaign visit my website here: https://t.co/Er6NXVvQE0 pic.twitter.com/b6Jeguz6lg

Obergefell rose to national prominence while his late husband, John Arthur, was suffering from ALS.

In the couple’s home state of Ohio, same-sex marriage wasn’t legal, and they learned that when Arthur died, Obergefell would not be listed as the surviving spouse on his death certificate.

“It was in that moment that we had the opportunity to fight for what we believe in or just walk away,” he told LGBTQ Nation last March.

Of course, Obergefell chose to fight, and with the case of Obergefell v. Hodges, he changed the course of history, as well as the lives of innumerable LGBTQ couples.

Since winning marriage equality for all Americans in 2015, Obergefell has dedicated his life to advocacy.

“Activism is now part of who I am,” he said, “I can’t let that go. [I’m now] always involved in fighting for something bigger than I am.”

For a long time, he spent his time moving between different causes and speaking engagements, and he also founded his own wine label, Equality Vines, in partnership with Matt Grove. The company donates to a variety of organizations for every bottle of wine sold.

In September 2020, he took a job as the Director of Individual Giving at Family Equality, which has spent more than 40 years fighting for lived and legal equality for LGBTQ families.

“I was fortunate enough to be part of a group of more than thirty plaintiffs who helped create a better world for younger generations and to help create a world where they’re growing up with the possibility of things we never thought we could do,” he said.

“To me, that’s the most important thing, just working and fighting to create a better world for the people who come after us.”

Is Kyrsten Sinema planning to run for president in 2024?