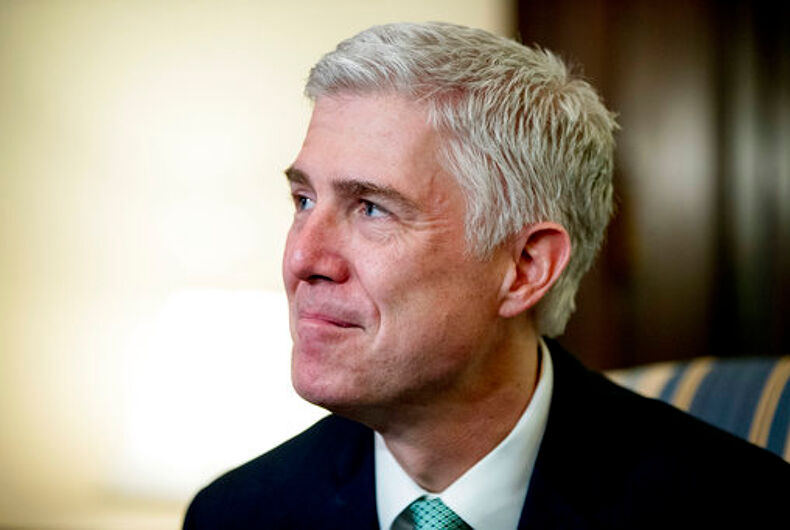 United States Supreme Court Justice Neil Gorsuch isn’t popular with his co-workers. According to sources inside the Court, Gorsuch isn’t well-regarded by either liberals or his fellow conservatives.

But after Gorsuch refused Chief Justice John Roberts’s request to wear a mask during arguments, his fellow jurists are even angrier. Gorsuch sits next to Justice Sonia Sotomayor, who is diabetic and at high risk of complications due to COVID, forcing her to avoid meetings and to work from her office.

Sotomayor has been attending oral arguments and the justices’ weekly conference virtually because of Gorsuch’s decision to flaunt coronavirus prevention measures in the middle of a pandemic.

Justice Stephen Breyer, who sits on the other side of Sotomayor, also began appearing through an audio connection the next week after testing positive for COVID. With Sotomayor out, Gorsuch was in clear view of Breyer, the oldest member of the court. A spokesperson said that Breyer’s rapid test result was a false positive.

“Subsequently, Justice Breyer received a negative test result from a PCR administered this morning,” the spokesman said. “The results of a PCR test taken by the Justice yesterday were also negative. Out of an abundance of caution, Justice Breyer participated in oral arguments today remotely from his chambers. Justice Breyer has been fully vaccinated, including a booster shot.”

During last week’s hours-long hearing on vaccine mandates, all of the justices wore masks except for Gorsuch. Two of the lawyers arguing before the court appeared virtually because they had COVID.

Reporters and lawyers appearing before the court are required to wear N95 masks; they are considered more protective than cloth or paper masks.

The chatter coming out of the Court frequently revolves around conservative infighting and maneuvering. Gorsuch, a Trump appointee to the Court, was found to be unqualified by several legal organizations before he was confirmed by Republicans. Now, even his fellow conservative justices are complaining about his inability to grasp complex subjects.

Last week Gorsuch joined the conservative majority to strike down vaccine and testing requirements for big businesses that were implemented by the Biden administration. The Court let stand a vaccine mandate for healthcare workers.

“Although Congress has indisputably given OSHA the power to regulate occupational dangers, it has not given that agency the power to regulate public health more broadly. Requiring the vaccination of 84 million Americans, selected simply because they work for employers with more than 100 employees, certainly falls in the latter category,” the unsigned opinion said.

“When we are wise, we know not to displace the judgments of experts, acting within the sphere Congress marked out and under Presidential control, to deal with emergency conditions,” Justice Breyer wrote in a scathing dissent joined that was joined by Sotomayor. “Today, we are not wise. In the face of a still-raging pandemic, this Court tells the agency charged with protecting worker safety that it may not do so in all the workplaces needed. As disease and death continue to mount, this Court tells the agency that it cannot respond in the most effective way possible.”

The Supreme Court, as a separate branch of government, sets its own rules when it comes to workplace requirements. Masks are mandated in the building.

As she did during Friday's arguments, Sonia Sotomayor will participate in this week's oral arguments remotely via a live audio feed from her chambers, SCOTUS spokesperson says.