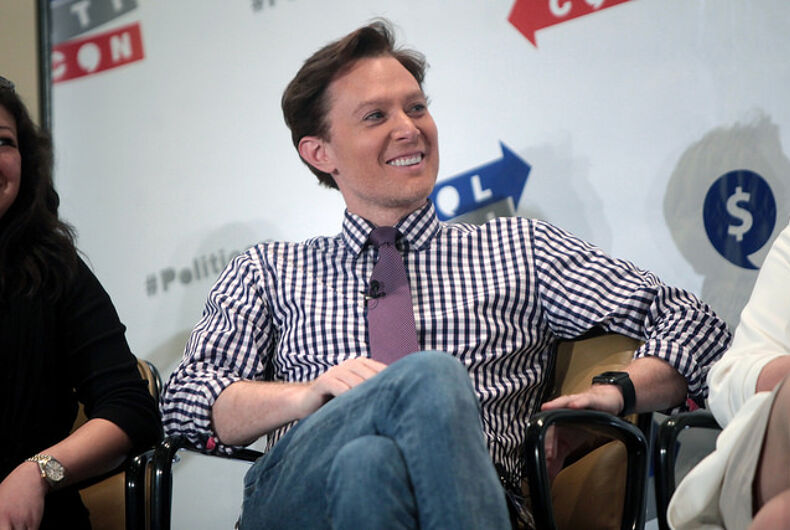 Clay Aiken speaking at the 2016 Politicon at the Pasadena Convention Center in Pasadena, California.Photo: Gage Skidmore via Flickr (CC license 2.0)

Out singer and former American Idol contestant Clay Aiken has announced he will run for Congress again. It will be the second time the North Carolina native has sought a seat in the House of Representatives.

The Durham-area district will not have an incumbent legislator in the race. Whoever wins the primary is expected to win the general election in the strongly-Democratic district.

Aiken lost a run in 2014 to Rep. Renee Ellmers (R). Ellmers was the first congresswoman to endorse Donald Trump’s presidential campaign. Aiken, however, has been a vocal critic of Trump.

“The people in the Triangle gave me the platform that I have, and I wanna use it to give back to them,” Aiken told The News & Observer. “I want to be a loud voice for the Triangle when I get to Congress, I will tell you that. And we need a big voice.”

With high name recognition, Aiken has a decided advantage over state legislators and county commissioners in the crowded race. And he willingly acknowledges the advantage – and explains how he could use that in government.

“It’s not very often that a freshman can join Congress and have a strong voice on day one,” Aiken said. “The folks here in the Triangle let me represent them nearly 20 years ago when I was just a kid on a singing competition. I owe my friends and neighbors here everything.”

Rep. David Price (D) announced he will not seek reelection. Price first won a seat in Congress in 1987 and was Aiken’s mentor and inspiration.

“It’s hard to wrap your head around what we’re losing with Congressman Price’s retirement,” Aiken said. “He’s delivered so much for the Triangle.”

No one has fans or supporters who are as amazing and loyal as mine! PERIOD.