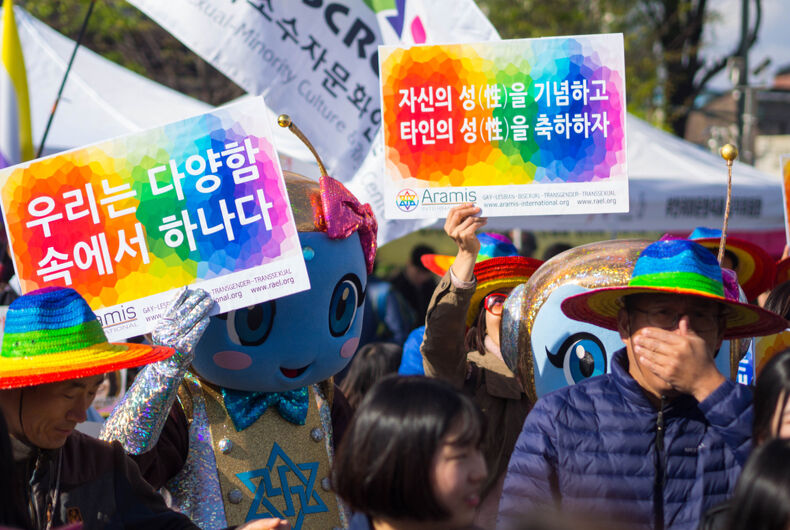 A court in Seoul, South Korea rejected a lawsuit that a gay couple brought to get equal access to health care benefits earlier today.

So Seong-wook, 30, sued the country’s National Health Insurance Service (NHIS) after he was kicked off of spousal benefits from the employer of his partner Kim Yong-min, 31.

Kim was able to register So as his dependent in early 2020 with the NHIS, possibly the first case of a same-sex partner being able to do so in the country.

But then the media picked up on their story and NHIS retracted Kim’s status as a dependent.

“The union of a man and woman is still considered the fundamental element of marriage, according to civil law, precedents of the Supreme Court and the Constitutional Court and the general perception of society,” the court ruled.

The couple wasn’t married since marriage equality isn’t recognized in South Korea, but they argued in court that opposite-sex couples who aren’t married are often recognized as common law spouses.

But the court rejected that argument: “Under the current legal system, it is difficult to evaluate the relationship between two people of the same sex as a common law relationship.”

“Even though the court has left it as a matter for the legislative branch, we will continue to fight until the day that our relationship is recognized,” Kim said outside the court, saying that they will appeal. “I believe that love will eventually win.”

“The court could have made a more meaningful decision on the case, but they are trying to avoid touching this issue,” said Lee Jong-geol of the LGBTQ organization Chingusai.

South Korea does not ban homosexuality, but LGBTQ people are not afforded many protections either. The law doesn’t ban anti-LGBTQ job discrimination. All people assigned male at birth are required to participate in two years of military service, but the military bans homosexuality. Queer people found in the military get dishonorably discharged and can be labeled as having a “behavioral disability.”