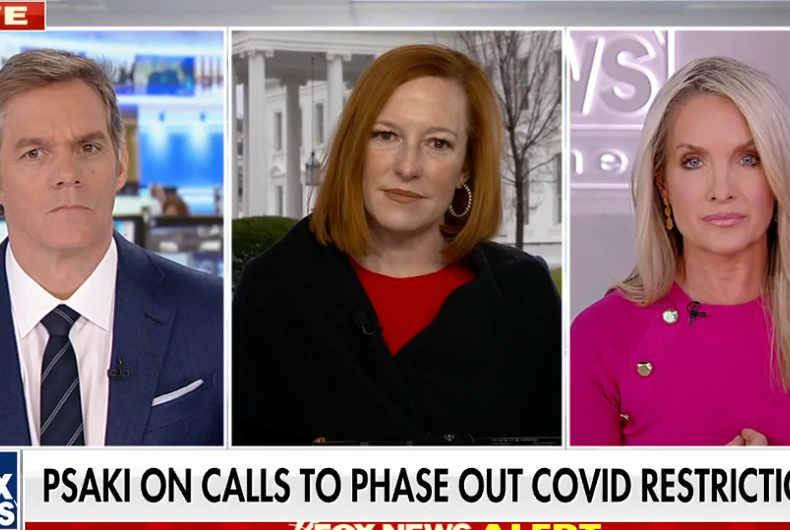 Conservatives are having a meltdown after White House Press Secretary Jen Psaki was interviewed on Fox News… and she did well.

“What kind of softball interview was that with Jen Psaki on Fox News with Bill Hemmer and Dana Perino?” one person complained on Twitter. “Absolutely ridiculous funfest!”

Hemmer and Perino are not exactly the best interviewers in the media.

“On the border now, it did not come up yesterday,” Hemmer said at one point in the interview, referring to Biden’s press conference.

“Well, I’m surprised, Bill, as well, because it was a nearly two-hour press conference and people asked whatever they wanted, including some crazy questions in there,” Psaki responded, smiling as she explained the concept of a press conference to a professional journalist.

Fox News' Bill Hemmer: "On the border now. It did not come up yesterday…"

Jen Psaki: "Well, I’m surprised Bill, as well. It was a nearly 2-hour press conference and people asked whatever they wanted, including some crazy questions in there." pic.twitter.com/gJtbkIysKY

Perino told Psaki that unvaccinated people “feel like scapegoats and second-class citizens.” She said that “Europe” is lifting COVID-19 restrictions and brought up Israel as an example of a European country. She said she’s pro-vaccination and then stopped there, not really explaining what her question for Psaki was.

Fox viewers online were not happy with the interview, angry that Hemmer and Perino couldn’t bring Psaki down.

What kind of softball interview was that with Jen Psaki on @FoxNews with Bill Hemmer and Dana Perino? Absolutely ridiculous funfest!

Both @BillHemmer and @DanaPerino are a disaster at asking questions. The questions are more like statements which gave Psaki help on how to answer them. Peri o is better at answering questions than asking them. Hammer is just plain lost. #FoxNews

Now you know why Direct TV is not dropping Fox

Why would @FoxNews @DanaPerino @BillHemmer have lying Jen Psaki on their network to spread more misinformation about the concerns of the Biden administration? I thought I mistakenly hit the CNN channel.

Going soft: @DanaPerino talks big but let’s Psaki off the hook by not asking what voter 2020 suppression evidence she has. @greggutfeld @Gutfeldfox @JesseBWatters @BillHemmer

Liberals and moderates, though, generally liked how Psaki’s appearance on the rightwing channel.

After watching @PressSec go into the belly of the beast (aka @FoxNews) this morning it left me with one impression.

She's damn good at her job.

RT if you agree

One of the problems with @Foxnews ( and there are MANY) … is that that they don't have ANY JOURNALISTS. NONE.

They have partisan hacks and most of them are NOT what I would consider "sharp", intelligent or incisive. They are mostly "C" or "D" league.https://t.co/Z6Ynlr6kaV

Jen Psaki ventures on to Fox News, and it was a win-win. More of this please. (@Mediaite) https://t.co/oPBvBB5zME