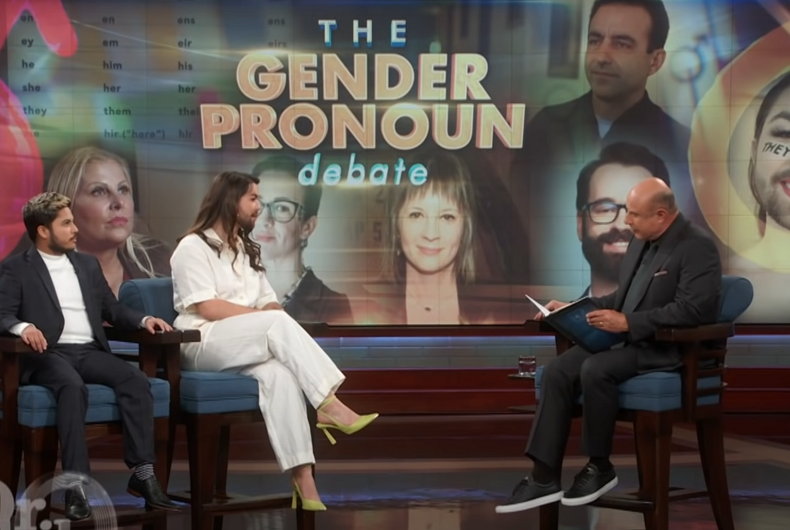 Phil McGraw, the host of the nationally syndicated talk show Dr. Phil, invited several anti-transgender activists to go on his show so that he could present “both sides of the gender pronoun debate.”

Trans people’s identities are, of course, not a debate, which made the episode particularly painful to watch.

McGraw, who is not currently a licensed therapist, introduced a young non-binary couple, Addison and Ethan. The words “THE GENDER PRONOUN DEBATE” showed on a screen behind them as McGraw struggled to say “LGBTQ+.”

“Everybody has pronouns,” Addison said. “You may use he and him as your pronouns. I use they and them.”

The episode went downhill when McGraw brought anti-trans internet troll Matt Walsh out. Walsh, a writer for The Daily Wire, published a book last year that mocks transgender people by comparing them to a kid who pretends to be a walrus. He also doesn’t think Pete and Chasten Buttigieg should be parents because “babies need their mothers, which is why two men shouldn’t be allowed to adopt babies in the first place.”

“I could sit here and say that I feel like a tomato plant,” Walsh said, “but that doesn’t mean that I actually am those things.”

“It’s delusion, it could be mental illness,” he said about transgender identity.

“Wow,” Addison said while Walsh ranted about how all young children are confused about their gender and need to be told what it is.

Walsh then berated Addison to give him a simple definition of the word “woman.” They responded that it means something different to every woman and that they aren’t a woman so it’s not their place to define that term.

“It’s to each their own,” they said. “Each woman, each man, each person is going to have a different relation with their own gender identity.”

“You want to appropriate womanhood!” Walsh snapped back at a person who literally just told him they are not a woman. “And turn it into a costume that can be worn!”

After that, McGraw introduced two parents. Matt is protesting his school district because teachers have talked about trans kids at school. Stacy pulled her children out of school because she didn’t want them to hear that trans people exist.

“People may think that if you don’t want to use their preferred pronouns, that you’re against gay people,” Stacy said. “This is 100% untrue. I am a huge advocate for gay people, trans people and the like.”

“I don’t want a teacher talking to my child about gender pronouns,” she said. “It is not appropriate. It’s crossing a line. It’s unacceptable.”

“I felt ambushed, because now I’m explaining to my son, he asked ‘What does sexist mean?'” Matt said. “As a parent, I felt trapped. I felt I had to explain these concepts to my son, I felt like I was whittling away his innocence.”

In the last segment, McGraw talked to a parent named Arlo who is raising their four-year-old child without gender.

“There’s always the fluidity, which pronoun you are each day so it’s constantly changing,” Stacy, the parent who pulled her kids out of school so that they wouldn’t hear about pronouns, told Arlo. “How confusing!”

“This should not be a part of the curriculum,” Matt said before McGraw told everyone they were out of time. The episode did not include guests who came to talk about the real effects of anti-transgender sentiments, such as violence and discrimination.

Walsh, whose job depends on generating media attention for his anti-LGBTQ antics, loved his appearance on the show. On Twitter, he’s telling everyone that he won the debate on whether trans and non-binary people exist.