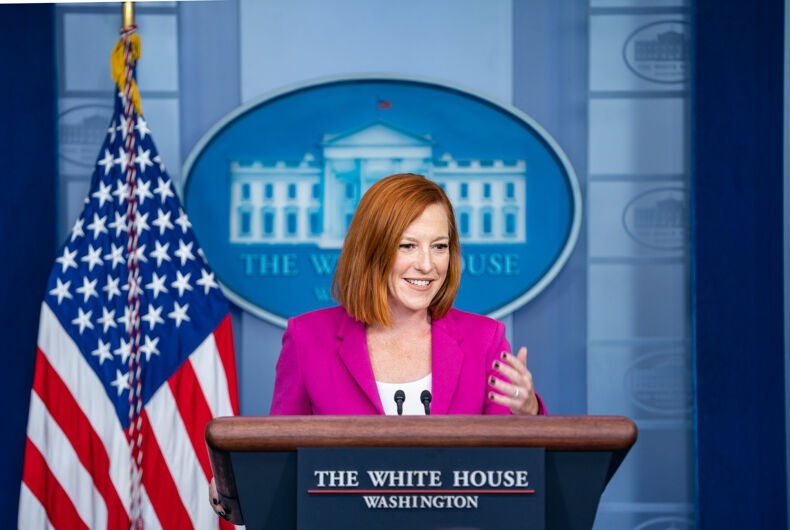 White House Press Secretary Jen Psaki responded to a reporter’s question about conservatives who are upset about President Joe Biden’s decision to nominate someone who is a Black woman as a justice to the Supreme Court.

Like she has all week, Psaki easily quelled any argument that it is inappropriate for Biden to choose a Black woman nominee. This time she did it by quoting another Republican president who made a similar pledge and served as a major influence to most Republicans and Donald Trump: Ronald Reagan.

As a follow-up question about Biden’s prospective Supreme Court nominee-to-be, Bloomberg White House correspondent Jennifer Epstein asked, “You know, there have already been conservatives, commentators talking a bit about why a Black woman…that’s — to commit to that is reverse racism or some kind of signaling — a virtue — virtue signaling or something like that.

“What do you say to people who are saying that that is, you know, an inappropriate way to set out prerequisites for who he’s going to choose?”

Psaki responded by reiterating Biden’s position on the matter, saying, “Well, first, we’d say that the fact that no Black woman has been nominated shows a deficiency of the past selection processes, not a lack of qualified candidates to be nominated to the Supreme Court.”

Psaki then got to the heart of the alleged “reverse racism” argument, showing that Republicans have their own tendency for “virtue signaling” when they see fit.

“I’d also note — I’ve heard that some conservatives may be fans of President Reagan,” she began, “and when he — former President Reagan — and when he nominated [former Supreme Court Justice] Sandra Day O’Connor he said, quote, ‘Judge O’Connor’s confirmation symbolizes the richness of opportunity that still abides in America — opportunity that permits persons of any sex, age, or [any] race, from every section and every walk of life, to aspire and achieve in a manner never before even dreamed about in human history.'”

But Psaki didn’t stop there — because calling out hypocrisy by Republicans doesn’t often do the trick — and proved that it’s not discriminatory to choose a qualified individual from a background underrepresented in their field.

“I’d also note, if you look at the President’s own record, not only has he nominated the most, the highest number of Black women to serve on the circuit court and the appellate court, but he has also nominated, across the board, the highest level of Ivy League nominees, right?” she said.

“He has nominated a broad sway of extremely qualified, experienced, and credential nominees — credentialed nominees, and done that by also making them incredibly diverse. And so the President’s view is that it is long past time to have a Black woman on the Supreme Court, and that it, again, reflects challenges or deficiencies in the past processes.”

Biden is far from the first President to choose to nominate someone of a certain identity or background. As Psaki noted, as a candidate for president, Reagan pledged to nominate a woman for the Supreme Court — and followed through in his first year in office as well. O’Connor not only went on to receive confirmation to the highest bench in the nation, but served for 25 years and authored many of the majority opinions from the Court’s decisions during her tenure before retiring in high regards.

At the time of Reagan’s promise, Nancy Thompson of the Republican Women’s Task Force said that it was “one of the first,” but not “the first” pledge of its kind.

In 2020, Trump pledged to an audience at a rally in North Carolina the day after Ruth Bader Ginsburg’s death that he would nominate a woman to take her place on the Court. (This was despite Ginsburg telling her granddaughter that her “most fervent wish is that I will not be replaced until a new president is installed.”)

The next week, Trump announced his intention to nominate Barrett, and she was nominated and confirmed within 30 days of Trump’s submission of her nomination to the Senate.

Reagan’s positions largely influence modern conservatives, although the Republican Party has become more ideologically aligned with Donald Trump over values they used to champion — but both made public pledges to nominate Supreme Court justices of a certain identity.

Pew Research Center survey in December 2021 found that out of Republican or Republican-leaning voters, Ronald Reagan was selected more than any other president since 1981 as the “best recent president” slightly over Trump, with some Republican voters also selected Barack Obama, Bill Clinton, and George W. Bush.

Biden’s prospective nominee will replace Associate Justice Stephen Breyer if confirmed, who is retiring when the current Supreme Court term ends, which could be as late as July. At 83, Breyer has been the oldest justice on the Supreme Court, an honor he inherited following Ginsburg’s death. Appointed by Bill Clinton, Breyer has been on the bench for 27 years.

Breyer’s retirement means that Biden will have an opportunity merely to preserve the minority that liberals have on the Court, instead of further eroding it. Right now, Breyer, Sonia Sotomayor, and Elena Kagan are the only three members of the Court who consistently support LGBTQ rights and other liberal issues.

Nation mourns out mayor after he dies by suicide