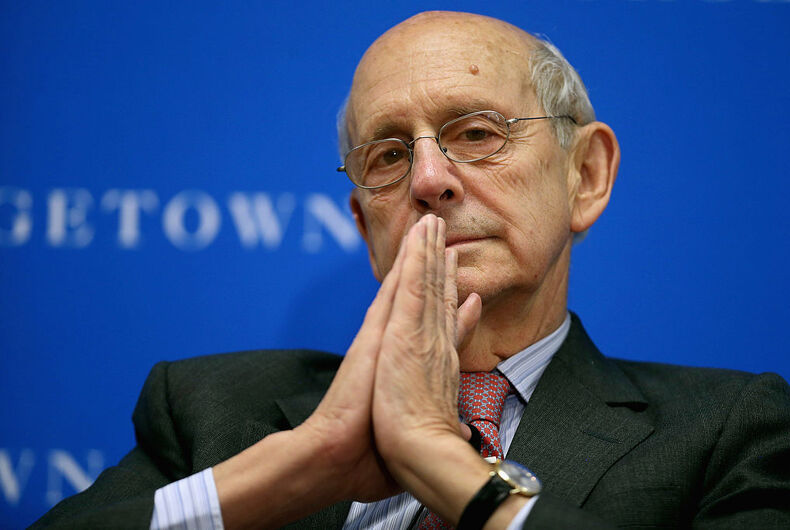 WASHINGTON, DC - APRIL 21: Supreme Court Associate Justice Stephen Breyer participates in a panel on "Lessons from the Past for the Future of Human Rights: A Conversation" at the Gewirz Student Center on the campus of the Georgetown University Law Center April 21, 2014 in Washington, DC. Organized by the law center, the New York Review of Books and the Bingham Centre for the Rule of Law the forum focused on the future of human rights. Photo: Chip Somodevilla/Getty Images

Supreme Court Justice Stephen Breyer, one of the three liberal justices on the Court, is retiring at the end of the current term in June, unleashing what promises to be an epic fight over his replacement.

Liberal groups have been calling for Breyer to resign ever since Joe Biden became president because Democrats still have a chance of replacing him with a like-minded justice.  Breyer had been resistant to the pressure, expressing the belief that the Court was above political considerations.

At 83, Breyer is the oldest justice on the Court. He assumed that title when fellow liberal Ruth Bader Ginsburg died just before the election in 2020. (Her death allowed Donald Trump to push through Amy Coney Barrett’s nomination.) Appointed by Bill Clinton, Breyer has been on the bench for 27 years.

Breyer’s retirement means that Biden will have an opportunity merely to preserve the minority that liberals have on the Court, instead of further eroding it. Right now, Breyer, Sonia Sotomayor, and Elena Kagan are the only three members of the Court who consistently support LGBTQ rights and other liberal issues.

Breyer’s timing is very problematic. Had he retired at the end of the Court term last year, Biden would have had a clearer path to getting a nominee through the Senate. His poll numbers were higher, the midterms were still more than a year away and the Democrats were moderately united, despite their razor thin margin. (As a reminder, the Senate is split 50-50 between the parties, with Vice President Kamala Harris as the tie-breaking vote.)

Now the political landscape is entirely different. The shine has worn off Biden’s presidency, thanks to inflation and the omicron surge. Republicans will resurrect the same bogus reasoning they used to block Merrick Garland’s nomination to the Supreme Court: no nominees during an election year. (That reasoning didn’t apply to their choice, Barrett, who was confirmed weeks before a presidential election.)

Then there are the Democrats themselves. “Democrats in disarray” is a perennial theme, but it is especially true right now. Thanks to Sen. Joe Manchin (D-WV) and especially Sen. Kyrsten Sinema (D-AZ), the Biden agenda is on the rocks and tensions among Senate Democrats is running particularly high. Sinema delights in being a kind of cactus-version of former Alaska Gov. Sarah Palin (R), running rogue and riling up her colleagues.

Getting Biden’s nominee through the confirmation process is going to rely on having Democrats acting in unison, and that’s precisely the kind of scenario that Sinema loves to disrupt. The next several months will be high-stakes political theater.