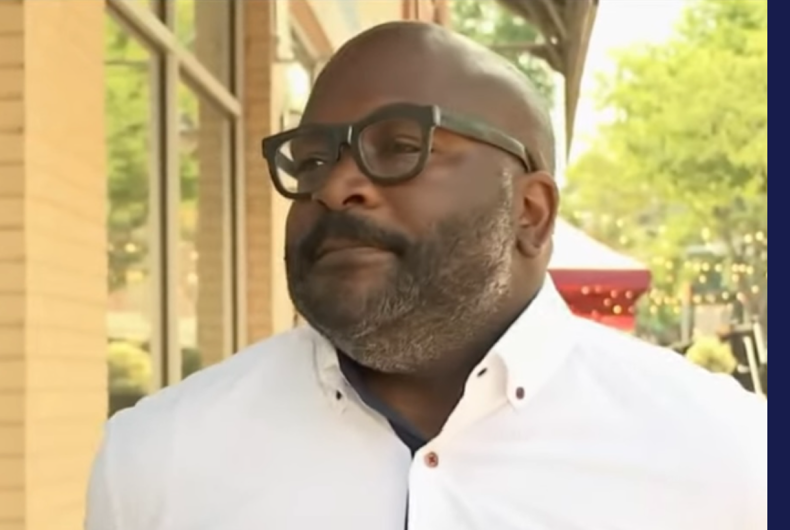 Kevin Ward, the mayor of Hyattsville, Maryland, was found shot and pronounced dead on January 25, the city he shepherded announced this week. Ward, 44, leaves behind a husband, two teenage sons, and more than 20,000 mourning residents in his town.

According to the city, Ward’s death is believed to be the result of suicide.

“It is with great sadness that we report that our beloved Hyattsville Mayor Kevin Ward passed away yesterday, January 25, from an apparent self-inflicted gunshot wound,” the city said in a statement on January 26. “Mayor Ward was a valued and trusted leader and a fierce advocate for all the people of Hyattsville. We are heartbroken at this loss and extend our deepest sympathy to his family.”

Ward’s body was found in a park in McLean, Virginia. There is not yet a confirmed cause of death from law enforcement or a coroner, and Ward was found in a park that former White House deputy counsel Vince Foster was also found dead, leading to tabloid speculation about Ward’s death.

Suicide among LGBTQ youth remains far too common, but people are learning that concerns about mental health extend  well into adulthood for LGBTQ people. A study published in the American Journal of Preventive Medicine in November 2021 found that queer men ages 35 to 64 were at a much higher risk of attempting suicide compared to younger queer men.

The city said details regarding a funeral or memorial services are going to be shared, but at the time they ask people to respect the Ward family’s privacy.

Noting that “The City knows that Mayor Ward was a well-connected member of our tight-knit community and that this is difficult news,” they said “Community members in need of grief counseling or mental health support are encouraged to contact Community Crisis Services, Inc.: dial 211 and press 1 or call 800-273-TALK; or the Affiliated Sante Group crisis support line: 301-429-2185.” They also included the National Suicide Prevention Lifeline, 1-800-273-8255, in their statement.

It is with great sadness that we report that our beloved #HyattsvilleMayor Kevin Ward passed away yesterday, January 25 from an apparent self-inflicted gunshot wound. We are heartbroken by this loss and share our deepest sympathy for the Mayor’s family. https://t.co/nemygRxFmL pic.twitter.com/8ZH33pXsfQ

Ward was elected mayor in 2021, after serving as interim mayor from 2019 to 2021 following the resignation of his predecessor Candace Hollingsworth.

On his website, Ward stated, “I believe in doing the work. I believe that if I can help someone, then I can change her or his life. This is why I dedicated my career to providing the best technology to education and human services, to help as many as I can.”

He shared a lot about his personality on the website, and noted he and his family moved to the town in 2014. “I like the roar of a V8 as much as I like the whir of an electronic car. And I like a sneaker more than I like a dress shoe. I am equally apt to listen to Stevie Nicks as [Megan] Thee Stallion. And I believe laughter is the best medicine,” his biography read.

“One of my favorite things to do in Hyattsville is to explore the city, especially its parks,” he added.

Prior to being mayor, Ward was twice elected as a Hyattsville Ward One councilmember, and he proudly touted legislation that made Hyattsville a sanctuary city and “unprecedented economic development across the city” as some of his accomplishments.

Outside of politics, Ward worked primarily as a technology consultant for education and family services, preceding by “private sector” work.

In a March 2021 interview, when asked what unique skill he may bring as a mayor, Ward told Route 1 Reporter, “I don’t know that there’s anything unique… because I’m just as human as everybody else in the city.”

Hyattsville is a largely Black city right outside of Washington, D.C., that was home to 21,187 people as of the 2020 Census. Hyattsville City Council Vice President Robert Croslin has become the Interim Mayor of Hyattsville following Ward’s death.

Condolences and tributes were made to Ward and his family from all over the country throughout the week, including officials such as Maryland Gov. Larry Hogan (R) and White House Senior Adviser on LGBTQ+ Engagement Reggie Greer.

Very saddened to hear of the passing of Mayor Kevin Ward, who was a bright and thoughtful LGBTQI+ leader in the Hyattsville, MD community. Thinking of his family and loved ones tonight. https://t.co/pK3VzuaBIN

The First Lady and I are saddened to learn of the passing of Hyattsville Mayor Kevin Ward.

We extend our most heartfelt condolences to the Ward family and the people of Hyattsville as they grieve this tragic loss.

I am deeply saddened to hear of the passing of my friend and City of Hyattsville Mayor Kevin Ward. Kevin was a wonderful friend, father, husband, and fierce advocate for the city’s residents.

I want to extend my deepest condolences to his family. He will be sorely missed. https://t.co/TMRypzWbL4

I'm devastated to hear of the passing of Hyattsville Mayor Kevin Ward. He was a devoted husband, father, grandfather, and public servant committed to his community. I'm sending my prayers to his loved ones and all the people whose lives he touched throughout his life.

We are deeply saddened to hear about the loss of Kevin Ward, Mayor of Hyattsville, Maryland, who died by suicide on Tuesday, January 25, 2022.

If you or someone you know is struggling and need immediate support, please reach out to BlackLine at 1-800-604-5841. #RestInPower pic.twitter.com/Bi2WFrHlpb

I send my deepest condolences to the family, friends and colleagues of Hyattsville mayor Kevin Ward, and to Hyattsville residents. This is a tragic loss and a reminder of how important it is pay attention to our mental health. I’m saying prayers of comfort for you all.