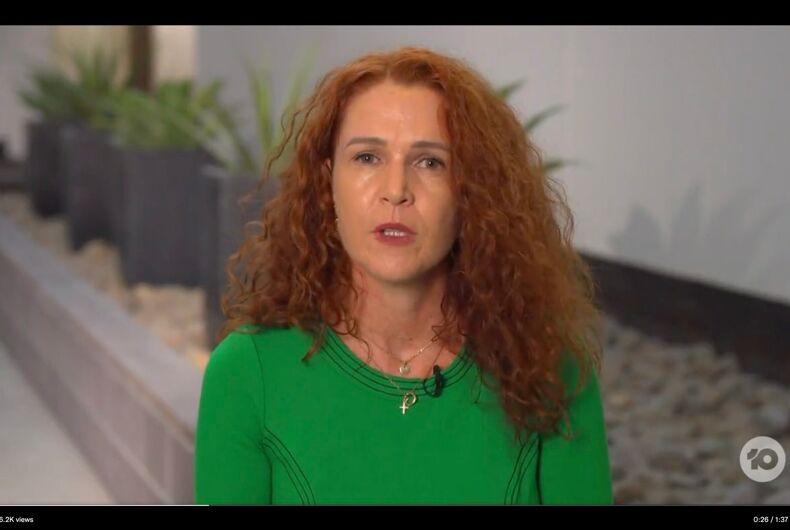 A teacher at a Christian K-12 school has resigned and pulled her own son out of the school after the administration asked parents to sign a contract condemning homosexuality and comparing it to bestiality and pedophilia.

“Not only could I not sign that as a parent, I couldn’t agree to be a teacher in a school that had that vocabulary and language around some of the most vulnerable kids that we interact with,” Helen Clapham Burns, who worked at the Citipointe Christian College in Brisbane, Australia, said on the news program The Project, while close to tears.

Burns also expressed devastation that she had to pull her son from school and away from his friends.

“We have been in trauma and stress this weekend as I am having to blow my son’s world apart, because he’s not going to get to do year 11 and 12 with his mates. I have to find him a new school,” she said.

Helen Clapham Burns is a teacher at Citipointe Christian College, where one of her children attends. The school has not backed down on its policy against LGBTQI+ students. Today, Helen handed in her resignation. She joins us to tell us all about why she has made the decision. pic.twitter.com/JJqd4rc7sn

The contract says that “any form of sexual immorality (including but not limiting to adultery, fornication, homosexual acts, bisexual acts, bestiality, incest, pedophilia and pornography) is sinful and offensive to God and is destructive to human relationships and society,” and says the school has the right to “exclude” any student from the school who doesn’t agree with these principles.

The contract also includes a refusal to acknowledge students’ gender identities other than the sex they were assigned at birth.

I have condensed the disgusting content in this contract down to this image.

But Burns isn’t the only angry one.

Over 80,000 people have signed a petition  demanding that the school amend the enrollment contract.

“Citipointe is using their religious beliefs to openly discriminate against queer and trans students,” the petition states, “as well as threatening to take away their education. Sign the petition to show Citipointe that we will not stand for such blatant transphobia and homophobia.”

The school’s principal pastor, Brian Mulheran, defended the contract in a statement, saying that Citipointe has “always held these Christian beliefs and we have tried to be fair and transparent to everyone in our community by making them clear in the enrollment contract.”