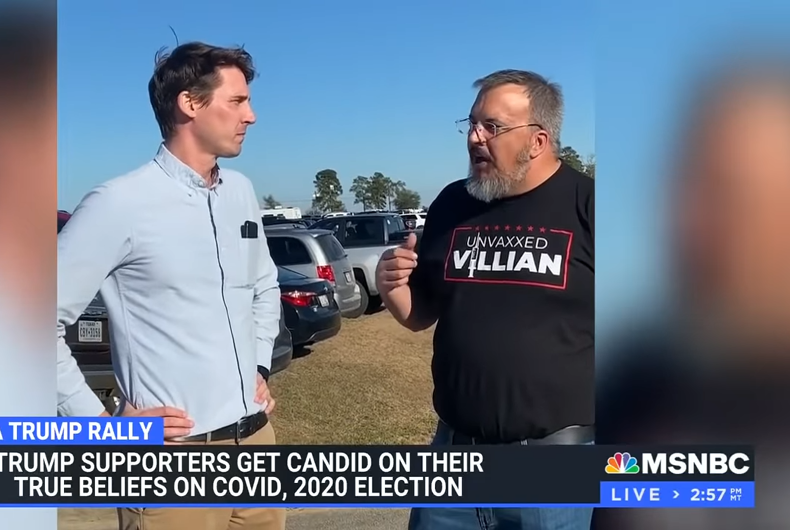 The Good Liars talks to one of Donald Trump's biggest - and dumbest - fans.Photo: Screenshot

The political satirists known as The Good Liars traveled to Donald Trump’s rally in Texas over the weekend and ran into the man who may be the former president’s dumbest supporter.

He’s a vaccine “villian” and he has some pretty unusual beliefs about ways to protect yourself during the pandemic caused by a virus that attacks the respiratory system. He’s safe, he says, because he smokes generic cigarettes.

Jason Selvig spoke with the unnamed man who was wearing a T-shirt that read “unvaxxed villian.”

“Is that how you spell villain?” Selvig asked the man.

“I grabbed the wrong graphic when I sent it to the T-shirt place to make a prototype,” he explained.

“But you still wore it today?” Selvig asked.

The man went on to explain that he hadn’t been vaccinated because he has type O negative blood and he smokes cigarettes.

“There were studies that have come out of France — nicotine users tend to not be susceptible to things,” he said.

“So nicotine users are not susceptible to things. Lung cancer might be one of the exceptions,” Selvig shot back.

“Well, I don’t smoke any of the name-brand stuff,” the idiot replied.

In reality, smokers are at a higher risk of COVID death than non-smokers.

In video aired on MSNBC, Selvig also interviews a woman who admits that even if she counted all of the votes cast in the presidential election herself, she still wouldn’t believe that Trump lost the election.