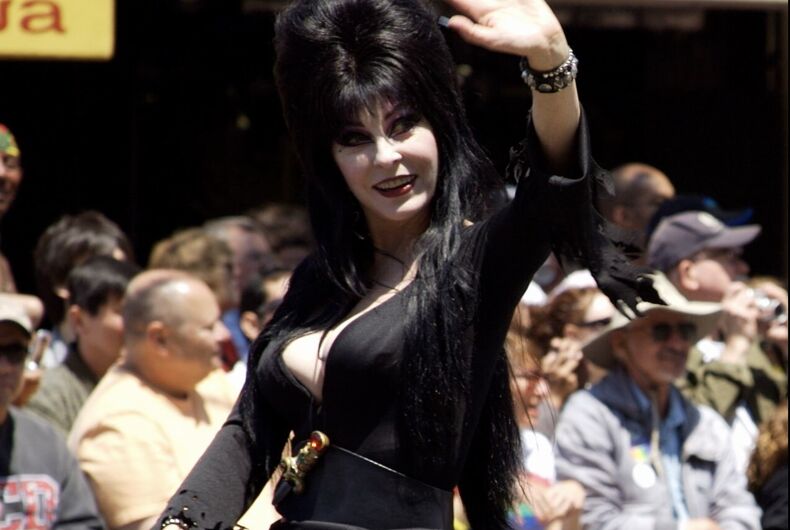 “I hate to tell them they already didn’t have a chance of me anyway.”

Peterson, 70, said that she lost 11,000 followers on one social media platform (she wouldn’t say which one) after she came out but gained 60,000 new followers.

“It was mostly straight, older guys who just felt lied to,” she said. “I don’t know – can’t please everybody!”

Peterson is best known for her spooky and sexy character Elvira, who she has played in movies and on television since the 1980s. Her drag-inspired aesthetic and campy humor attracted her a cult following over the decades, as well as many LGBTQ fans.

She released her memoirs Yours Cruelly, Elvira this past September, where she revealed that she had been in a relationship with a personal trainer named Teresa “T” Wierson for 19 years, who she described as a “beautiful, androgynous creature.”

Peterson wrote that she first kissed Wierson after she ended her 25-year marriage to her ex-husband, at a time when she just thought she and Wierson had a close friendship.

“I think I was even more surprised,” she wrote. “What the hell was I doing? I’d never been interested in women as anything other than friends. I felt so confused. This just wasn’t me! I was stunned that I’d been friends with her for so many years and never noticed our chemistry. I soon discovered that we connected sexually in a way I’d never experienced.”

Peterson said on the podcast this week that she kept her sexuality a secret from her fans for years.

“Nobody was ready for that,” she said. “And apparently we kept it a pretty damn good secret because nobody knew — and everybody was surprised.”

She said she was worried that some LGBTQ people might think she’s a liar for coming out after keeping her relationship a secret for so long.

“Honestly, I worried more about my gay fan base,” she said. “Because I hope they embraced it, but I was feeling like: ‘What if they think I’m a big fat hypocrite, and I was lying to them?’”

“So that scared me more.”

Peterson said that one of the good parts of coming out was that she didn’t have to introduce Wierson as her assistant anymore.

It’s been one year since the Capitol Insurrection. Here are 5 anti-LGBTQ people who’ve been charged.