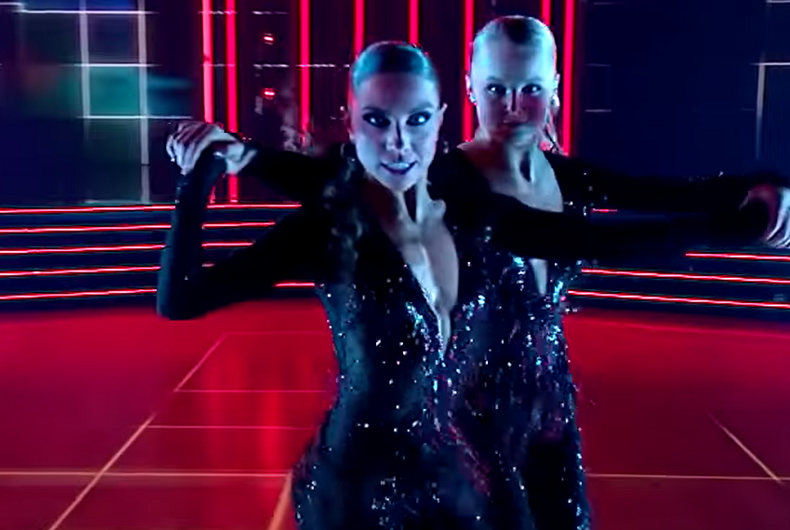 JoJo Siwa and Jenna Johnson just made it to the semifinals on ABC’s long-running reality show Dancing with the Stars. The women are the first same-sex pairing in the show’s 30 seasons.

Siwa and Johnson stunned the judges on the show’s Janet Jackson Night with a sexy salsa performance, getting a score of 39 out of 40, the highest score of the night.

Related: JoJo Siwa stuns in gender-bending Cinderella waltz on Dancing With the Stars

“You are such a great partner, a great leader,” judge Derek Hough told Siwa. “That was just… I’m speechless.”

Earlier in the episode, Siwa talked about how supportive her fans were of her when she came out. She thanked her fans who “just made my heart so fulfilled,” but also opened up about the other fans.

“I knew the second that I realized I was in love with a girl that not everyone was going to love it,” she said. “It blows my mind that some people won’t let their kids watch me videos anymore. They’ll tell their kids they can never like me again, only because of who I love. I was no different from the day before.”

“It’s wild to think that the scariest thing – coming out to the world – is the best thing I ever did.”

Later in the show, Siwa and Johnson performed a rumba later in the episode in a dance-off against YouTuber Olivia Jade and dance partner Val Chmerkovskiy.

Siwa and Johnson made it through the episode, which ended in a double elimination. They will go on to compete in the show’s semifinals next week.

Jade and Chmerkovskiy were one of the two pairings eliminated in the episode.