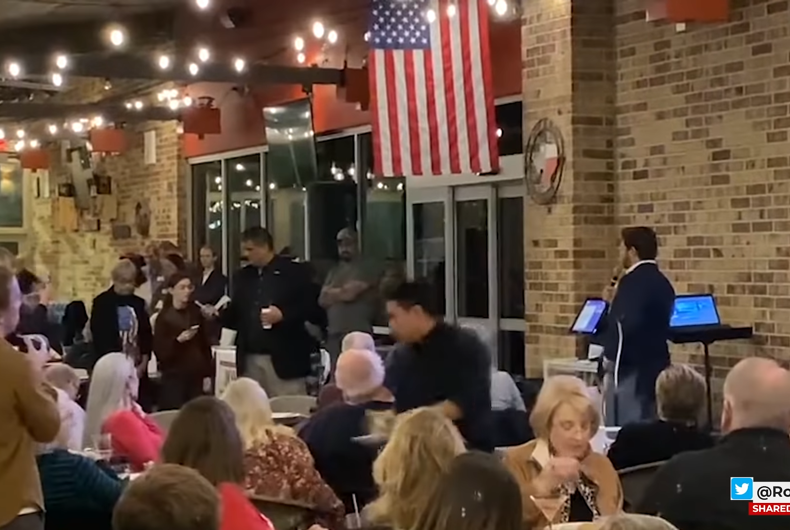 GOP Congressman Dan Crenshaw (TX) got into a testy exchange with a young woman about his religious faith.Photo: Screenshot

Rep. Dan Crenshaw (R-TX) was booed by his constituents after he snapped at a girl who asked him a question about his religious beliefs. He has also come under fire online as people react to the testy exchange.

The young woman quoted Crenshaw from an appearance on a podcast to promote the congressman’s book, Fortitude, which focuses on the importance of role models.

During the podcast episode, the hosts quoted from the book and asked him to respond.

“The important thing is that we societal hero archetypes that we look up to. Jesus is a hero archetype, Superman is a hero archetype. Real characters too, you know, I put, I could name a thousand,” Crenshaw said on the podcast. “You know, know Rosa Parks, Ronald Reagan, all of these people embody certain attributes that the American people think ‘This is good.'”

The girl noted that Crenshaw has frequently referred to himself as a Christian, but the quote insinuates that he believes Jesus is a fictional character.

“I can’t wrap my head around this,” she said before Crenshaw cut her off.

“Well, I’ll help you,” he interjected. “Put a period after the word Jesus and don’t question my faith.”

As the audience booed, Crenshaw demanded, “You guys can ask questions about all of these things and I’ll answer that but don’t question my faith.”

“Moron!” one man yells out from the crowd. “You don’t talk to a kid like that!”

“I didn’t question your faith and this is exactly what you said,” the girl responded to Crenshaw.

“Is Jesus the son of God?” another man hollered from the crowd.

“Of course,” Crenshaw replied. “Of course he’s the son of God.”

“You’re saying two different things,” the girl shot back, “from what you said on the podcast and what you’re saying here.”

“You’re twisting it that way,” Crenshaw snapped. “And it’s not very Christian.”

Dan Crenshaw gets upset at a 10 year old girl at an event and gets heckled by the crowd. “Don’t question my faith.” pic.twitter.com/EYEXYpXKIB

The reason they like to wrap their policies in Jesus is so they can say “don’t question my faith” while they do things that would make Jesus go back into the cave rolling his eyes and shaking his head.