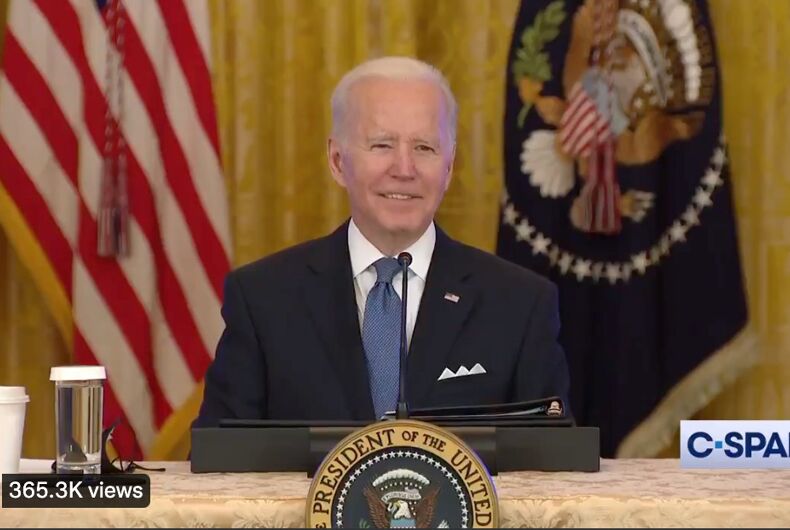 President Joe Biden was caught calling Fox reporter Peter Doocy a "stupid son of a bitch" on a hot mic during a photo opPhoto: CSPAN

Joe Biden called Fox reporter Peter Doocy to apologize after the president was caught on a hot mic calling the journalist a “stupid son of a bitch.”

The internet erupted in GOP handwringing over the insult while Democrats reveled in the gaffe. Republicans quickly condemned the statement but did not dispute its accuracy.

Related: Florida Republicans are trying to ban teachers from talking about LGBTQ people

Doocy has spent the past year attempting to bait Press Secretary Jen Psaki into saying something scandalous but has ended up on the receiving end of the setup every time in a matchup that would make Wile E. Coyote jealous. Psaki’s sharp and witty retorts to Doocy have spawned their own hashtag – the #PsakiBomb.

So when Doocy asked a question with an obvious answer that was meant only to repeat a Republican attack line on the administration, Biden couldn’t resist commenting on the inanity.

As Biden smiled for the cameras, Doocy and other reporters shouted out questions for the president.

“Do you think inflation is a political liability in the midterms?” Doocy asked.

The inflation rate has risen to seven percent for the 12 months ending in December 2021. That is the highest rate since June 1982 as the country struggles to regain financial footing as coronavirus hindered supply chains, leading to increasing prices.

Biden, who kept a straight face throughout, muttered under his breath in response to Doocy’s question.

“It’s a great asset, more inflation,” Biden deadpanned. “What a stupid son of a bitch.”

While Biden’s gaffe has Republicans clutching their pearls, they remained silent for the most part as former president Donald Trump attacked outlets and members of the press by name and called on his supporters to terrorize them. Members of the press were repeatedly targeted by Trump supporters in an attempt to intimidate journalists into reporting favorably on the president’s agenda.

Here's the hot mic moment that everyone is tweeting about. pic.twitter.com/0tSs8fesy9

A reminder- when every talking head on Fox “News” clutches their pearls because Biden called Doocy Lite a “stupid son of a bitch”, that they said NOTHING when the former guy spent years attacking journalists he didn’t like. Especially women.
But hypocrisy is the brand after all. pic.twitter.com/0Un7v7CgPC

Meet the first trans climber to attempt The Seven Summits