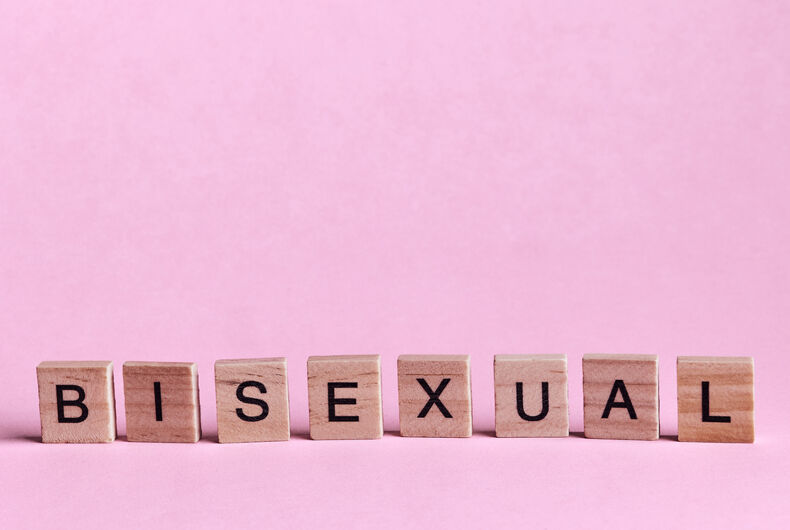 Defining bisexuality is easy. But bi culture? That may be harder to distill in a single sentence. Many have tried, with listicles on things that are “definitely bi culture” littering the web every Bisexual Awareness Week.

Cuffing your jeans? Bi. Finger guns? Also bi. Not being able to sit in a chair properly? Definitely bi. Wearing flannel? Okay, that’s more of a lesbian thing, but it’s also bi. The bisexual bob? Duh, it’s in the name!

But bisexual culture is more than just having an affinity for a bunch of fashion trends and adopting certain mannerisms. It also means dealing with both the good and the bad that come with identifying as bisexual –  whether that means asserting your visibility in queer spaces or having barely any bisexual representation on TV, save for the stereotypical toxic bi character that’ll most likely get killed off in the end.

If you’re bi, then you probably know what we’re talking about. If you don’t, then strap in. Here, we attempt to look beyond the random stuff and dig deep into the things that bring bisexual people together.

1. Being Attracted To… Well, It’s Complicated

Many bisexuals will agree that much of the bisexual experience is about correcting myths and misconceptions about the sexual orientation. And one of the most pervasive myths about bisexuality? Its actual definition.

The actual definition of bisexuality – at least the ones that bi activists use – comes from the  Bay Area Bisexual Network’s 1990 Bisexual Manifesto, which states that bisexuals are people who are attracted to people of the same and different genders. That means bisexuals can be attracted to pretty much anyone, man, woman, non-binary, genderfluid, etc. – and that our attraction is not a 50-50 split.

With that being said, there is a long-running joke in the community about how bisexuals can often be super picky about the men they date while being hopeless around women.

In the hierarchy of the LGBTQ+ community, bisexuals, alongside transgender people, are unfortunately at the bottom of the barrel. So many of the misconceptions about bisexuality do, in fact, stem from biphobia and bisexual invisibility. This is why we celebrate Bi Visibility Day and Bi Awareness Week every year, and why jokes about being actually invisible until that one special day are all over Twitter.

But where does bi invisibility even come from? Some experts argue that bi erasure – which is the phenomenon of invalidating the legitimacy of bisexuality – happens because many people still hold on to their obsession with the binary. Bisexuality challenges the very idea that sexuality is as cut and dry as being gay or straight. And for some people, the idea of being more than 100 percent straight can be too much to bear. Make with that what you will.

So a big part of bi culture is about feeling invisible, invalid, or not wholly accepted in both queer and straight spaces. Bisexuals often have to face comments and jokes about how they’re indecisive, confused, or greedy. Bi men who are often made to feel like they don’t exist at all, are told they’re just “bi now, gay later” – implying that their bisexuality is just a stop on their way towards coming out as gay. Bi girls, on the other hand, are often told that they’re just bi for attention. Or worse, they’re sexualized by straight men to the point where, if you say you’re bi, some men will assume that you’re down for a threesome.

Finally, bi erasure also happens to bi folks who enter relationships, as most people tend to assume that once a bi person enters a relationship, they magically stop being bi. No. That simply is not true. Who you end up with doesn’t change who you’re capable of being attracted to.

3. Dealing With The Consequences Of Bi Erasure

There is a pervasive myth in the LGBTQ+ community that bisexuals have something called “bisexual privilege”, which implies that by being able to blend in with straight people and having the capacity to enter heterosexual relationships, bi people have some kind of privilege over lesbians and gay men.

But writer Toni Stanger perfectly dispels this myth by asking, “How come it’s called ‘bi privilege’ for us, but for gay men and lesbians, it’s rightfully called ‘being in the closet’?”

And that feeling of being misunderstood, and of feeling like an outsider even within your own community, isn’t just an unpleasant experience, it can seriously impact your self-confidence, self-worth, and self-acceptance. In fact, studies found that bisexual people face significantly higher risks of experiencing depression, anxiety, PTSD, disordered eating, and suicidal ideation compared to gay, lesbian, and straight people.

4. Using Humor As A Coping Mechanism

Because of the “double discrimination” that bisexuals feel from both the straights and the queer community, bisexuals have adapted their own special brand of humor to cope. It’s very specific, full of inside jokes, and teeters between incorporating and criticizing the humor of those who invalidate us.

Like the bisexual community, bi culture is vastly diverse, but also contains characteristics that are just unmistakable bi – at least to those who identify with it. Just look at some of the most common bi joke material, from how being bi means not knowing whether you want to be with someone or you want to be someone, being able to identify someone is bi by the way they tuck their dad shirt into their cuffed jeans, being unable to sit in chairs properly, or how you’ve been subjected to so much bi erasure that you’re essentially mythical creatures capable of actual invisibility at this point.

These are things that could be a little hard to explain to a straight person, don’t you think?

5. Having An Amazing Community To Rely On

Finally, bi culture is about having an amazing community of like-minded folks who share the pain, the struggle, and awkwardness of being bisexual in a world that doesn’t quite know what to do with them. And thanks to the internet, the bi community is there 24/7, even beyond Bi Awareness Week and Bi Visibility Day.

There is no one way to be bisexual. But there is a myriad of experiences and challenges that all bisexuals can relate to – at least on some level. Bi culture is the amalgamation of all these experiences and the ways in which we cope and deal with them.

For all the bi people who are feeling lost and alone, don’t give up. There is a community of other bisexuals out there who commiserate with you as you face all the ups and downs that come with being bi.

Related: This chair is meant for bisexual people to use. It’s perfect.