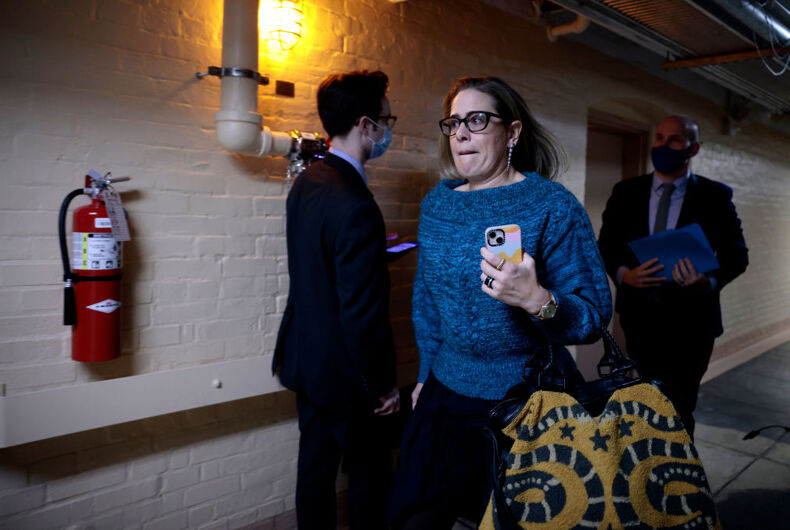 WASHINGTON, DC - DECEMBER 15: Sen. Kyrsten Sinema (D-AZ) departs from a meeting with fellow Democratic Senators in the basement of the U.S. Capitol Building on December 15, 2021 in Washington, DC. The Senators held the meeting to discuss senate rules with their staff members. Photo: Photo by Anna Moneymaker/Getty Images

Sen. Kyrsten Sinema (D-AZ) still wants four activists “held accountable” for following her into a public restroom to ask her questions about her immigration policies and lack of support for President Joe Biden’s domestic agenda. Prosecution could result in deportation for one of the organizers.

But police declined to recommend felony charges against the group after Sinema admitted that she’d fled into the restroom deliberately because she thought it was illegal for them to continue filming her. Instead of simply talking to her constituents, Sinema set them up for arrest.

Related: LGBTQ people need to wash our hands of Kyrsten Sinema. She doesn’t deserve our support.

In a police report obtained by the Arizona Mirror under a state open records law, Sgt. Katie Fuchtman recounted her conversation with Sinema after the incident.

“Sinema stated this was not her first time being approached in this way and that is why she entered the bathroom, knowing it was illegal for someone to record another person inside the bathroom,” Fuchtman wrote. “Sinema cares about the students and does not want their lives ruined for a horrible mistake they made but agrees she wants them held accountable.”

But exactly how much Sinema cares has been a matter of national discussion over the past few months as the recalcitrant Democrat obstructs Biden’s campaign promises – and her constituents’ and supporters’ wishes. By withholding her support for overturning the filibuster – a Senate procedural maneuver historically used to thwart civil rights legislation that is currently being used to block voting rights, immigration, and LGBTQ equality legislation – Sinema has doomed several priorities for her own voters.

While a bill only requires 51 votes to pass, a procedural maneuver can require 60 votes to advance the bill to an actual vote. With the chamber evenly divided 50-50 between the parties, reaching 60 votes during a time of hyper-partisanship (and with Donald Trump leading the GOP by default) is almost an impossibility.

But Sinema has been tight-lipped about why she has suddenly abandoned her constituents and campaign promises in favor of currying favor with Republicans. She refuses to talk to reporters or constituents; her colleagues have also complained that her sudden embrace of the filibuster makes no sense.

Immigration activists associated with Living United for Change in Arizona (LUCHA) tried to confront her about it at Arizona State University in Tempe and posted the video to social media.

In the video, Sinema entered a public bathroom as LUCHA activists followed her while talking to her about immigration. Immigration reform – including a path to citizenship for many undocumented immigrants in the U.S. – is included in the Build Back Better Bill, which Sinema has stalled.

One activist named Blanca talked to Sinema while she was in the stall and told her that both of her grandparents got deported in 2010 and that she couldn’t go to Mexico when her grandfather died recently because of her immigration status. Another activist shared that she was a victim of human trafficking.

“There’s millions of undocumented people just like me who share the same story,” Blanca said. “Or even worse things that happen to them because of SB1070 and because of anti-immigrant legislation, and this is the opportunity to pass it right now and we need you to. We need to hold you accountable to what you told us you were going to pass when we knocked on doors for you. It’s not right.”

But Blanca has temporary deferral from deportation under the Deferred Action for Childhood Arrivals (DACA) program. DACA recipients, also known as Dreamers, are the lowest level priority for immigration officials, but trouble with the law jeopardizes that.

“One of the ways to quickly lose DACA is to get arrested for any crime,” said Ruben Reyes, an immigration attorney. “Even without a conviction, simply the arrest record… may complicate the renewal case for DACA. That would open you up to removal by the government.”

“When you apply for DACA, you can have a misdemeanor on your record and still get DACA, but there is discretion that the government is going to use in deciding on whether or not you deserve it,” he said. “So, if that misdemeanor happened a long time ago… it’d be easy to argue they made the mistake, they’ve learned their lesson, and they’ve been productive members of society since then. It’s very different when they are actively engaging in conduct that leads to their arrest.”

Police ignored Sinema’s suggested felony charges in favor of misdemeanors, but prosecutors have returned the case back to officers, asking for more information.

🔴BREAKING: Blanca, an AZ immigrant youth confronts @SenatorSinema inside her classroom, where she teaches @ ASU. "in 2010 both my grandparents got deported bc of SB1070…my grandfather passed away 2 wks ago & I wasn't able to go to Mexico bc there is no pathway to citizenship." pic.twitter.com/JDZYY2fOD2

Bi culture beyond the cliches & stereotypes