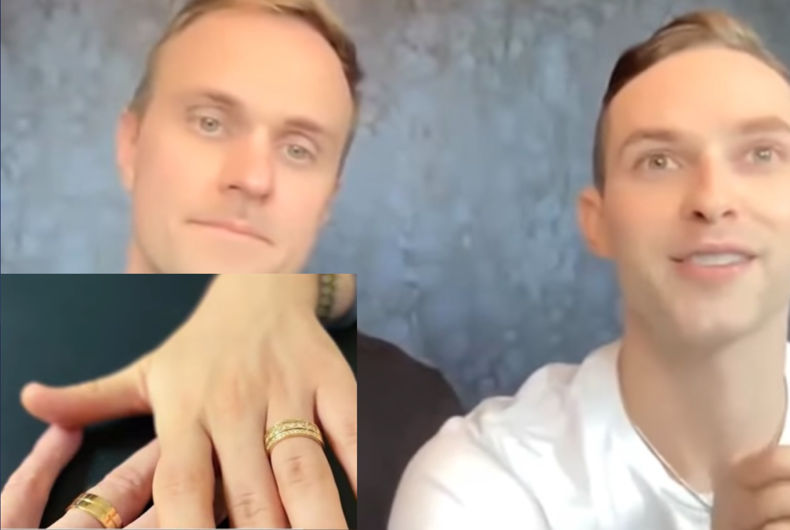 Out Olympian and TV personality Adam Rippon has revealed this week that he and his fiancé, real estate broker Jussi-Pekka “JP” Kajaala, eloped spontaneously in a New Year’s Eve ceremony in Encino, California. The wedding only featured them, their 4-month-old pitbull mix puppy named Tony, and wedding officiant Maria.

The two began dating after meeting via the app Tinder in 2017, and got engaged in December 2020, when Kajaala proposed while the two were in his native Finland.

Related: Brittany Bowe becomes the first out athlete to earn a spot on Team USA for Winter Olympics

Rippon and Kajaala hinted previously that they might have a “logical and cheap” ceremony last year, but they were still waiting to figure out when was the right time.

SURPRISE 🥂 WE ARE MARRIED🥲❤️ One afternoon JP and I looked at each other and said the very classic *romantic* phrase of “let’s just go do it now”. So we did. It was just the three of us and it was perfect 12/31/21 🌟🐶🙆🏼‍♂️ pic.twitter.com/DanJdBvfPT

Kajaala explained, “We had some plans for the date, but then we just decided to do it sooner because New Year’s Eve is not a big thing for us. We’re in bed like 10:30. So then we decided that, oh, maybe going to use this day for something special like this, and now we have a great meaning for that day.”

So the two dressed in their “Easter Sunday best,” used their engagement bands as their wedding rings — both made of gold, Rippon’s with diamonds “because I wanted it to glisten,” and Kajaala’s without, and said their “I do”s. Afterwards, they called their families, who were far from surprised by the revelation.

Then, “we got home and got right to champagne immediately,” Rippon said, and they “were in bed by 10:30.”

“We always wanted to do something simple and just the two of us,” the Olympian explained. While they hope to have a “summer party” when it is safe and possible, one in California and another in Finland, they are more than happy to finally be each other’s husbands.

Kajaala only recently relocated from Finland to the United States full time, and the two are now settling into their home in Pasadena. Rippon will travel for the upcoming Olympics to coach skater Mariah Bell, but beyond that, they’re glad that they can spend more of their time together and not have to schedule it ahead, especially since they’re not planning on having children.

Congratulations have poured in for the couple… in many different forms.

Rippon, 32, became a household name after the 2018 Winter Olympics, where he was one of three to win the bronze medal in team figure skating. That made Rippon the United States’ first openly gay athlete to win a medal at the Winter Olympics. Prior to those Olympics, Rippon had won multiple gold medals and other honors in figure skating starting in 2008.

On the Olympic stage, Rippon notably called out then-Vice President Mike Pence for his anti-LGBTQ past, and skipped visiting the Trump White House with other Olympian medalists.

Shortly after the Olympics, he became a contestant on Dancing with the Stars. Partnered with pro dancer Jenna Johnson, he won Season 26 of the show, making him the first out champion in the show’s history. Months later, he officially retired from pro figure skating competition, and was honored as a member of TIME Magazine’s “TIME 100” list in 2019. His memoir, Beautiful on the Outside, was published in October 2019.