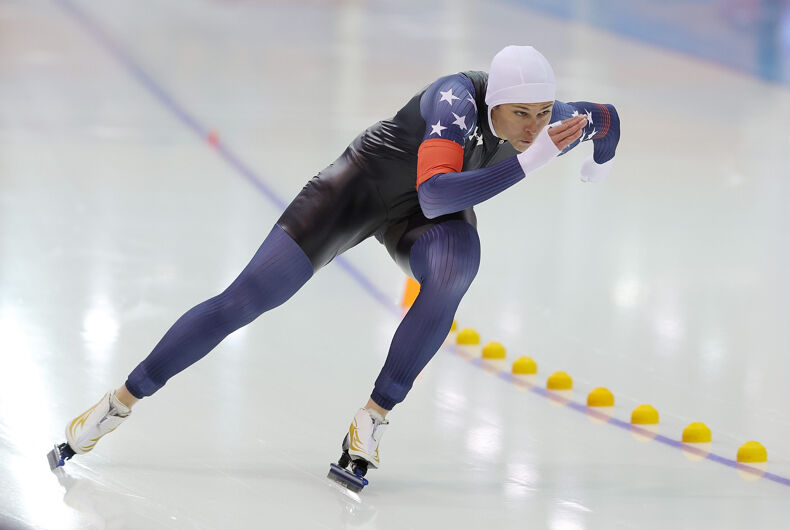 Although the United States government has enacted a diplomatic boycott of China, and the Omicron variant is continuing to draw out the coronavirus pandemic, athletes are still competing in the 2022 Winter Olympics being held in Beijing next month. Ice skater Brittany Bowe has become the first out athlete to earn a roster spot to compete in one of the competition’s 109 scheduled events for the United States.

Bowe qualified for the 1000-meter ice speed skating with a time of 1:13.63 during trials this week — not only first among all competitors, but just seconds behind the world record she set in the event in 2019, at a time of 1:11.61.

Related: Out Olympian needs surgery after getting caught in a melee that possibly left one dead

“It’s always fun to get a track record, and with the track record being mine, to say I went fastest in this building than I ever have in my life is a pretty big confidence booster going into Beijing,” Bowe said after the trials, according to NBC Sports.

Bowe, 33, holds a bronze medal in the same event from the 2018 Olympics in South Korea, a gold medal from the Pan American Games, four gold medals form the Speed Skating Championships, and eight gold medals from Women’s World Championships in inline speed skating.

She has done nothing to hide her sexual orientation. In 2017, she talked with NBC about dating Dutch speed skater Manon Kamminga. She was the only publicly out LGBTQ woman on Team USA at the time she qualified for the 2018 Olympics, and one of only 15 out Olympians at the Games’ conclusion, according to Outsports. At the 2020 Olympics held last year, there were 182 out LGBTQ athletes. Multiple out athletes outside of Bowe have already qualified for Beijing.

At the Summer Olympics held last year in Tokyo, the United States finished with the most medals in the end, but “Team LGBTQ,” as the out athletes competing have been dubbed, earned 56 medals between them. That would have put them in sixth as an official Olympic Team.

More out athletes competed at the Games in Tokyo than in any other previous Olympics. Team LGBTQ also had more athletes competing in the Games than 190 of the 206 participating Olympic squads — 205 from different countries or independently-participating territories (such as Puerto Rico and American Samoa), and one team made of refugee athletes.

That means Team LGBTQ had more medals than 200 Olympic squads that went to Tokyo. That was despite the exclusion of several out athletes from certain sports that excluded several athletes that largely excluded gender diverse athletes or those with differences in sex development (DSD).

In November, the International Olympic Committee released new guidelines for transgender participation in their sports that activists and athletes alike are hailing as a massive victory for trans equality.

Those principles – developed after two years of consultations with over 250 athletes and other “concerned stakeholders” – include inclusion, prevention of harm, non-discrimination, right to privacy, and – perhaps most notably – no presumption of advantage. However, they are not binding across the entire Olympic body.