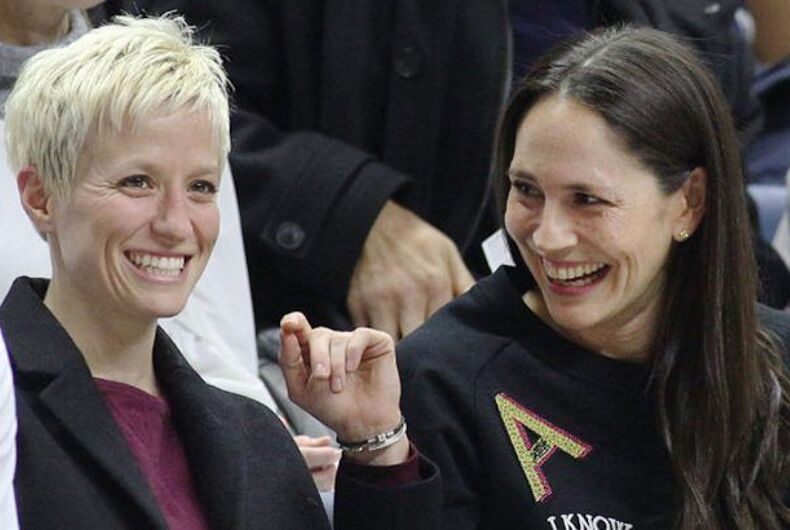 Vogue has just honored the celebrity lesbian couple of soccer star Megan Rapinoe and her fiancee, Seattle Storm basketball player Sue Bird, as the first couple in their new celebrity romance column entitled “I Want What They Have.”

The column seeks to examine “celebrity couples that give us hope for our own romantic futures and trying to learn what we can from their well-documented bonds.”

Rapinoe, who lead the U.S. Women’s National Soccer Team to win the 2019 World Cup, began dating Bird after they met at the 2016 Olympics. Bird then came out and revealed their relationship in 2017. The couple got engaged during their 2018 vacation in the Caribbean island nation of Antigua. Their engagement compelled Democratic President Joe Biden to congratulate them.

But, as Vogue notes, “one of the coolest things about Rapinoe and Bird is their mutual passion for activism.”

They were the first same-sex couple on the cover of ESPN’s 2017 Body Issue in 2017, providing visibility to queer athletes.

Both women have been outspoken supporters of the Black Lives Matter (BLM) movement — appearing in PSAs, wearing supportive jerseys and (for Rapinoe) taking a knee on-field during the national anthem to protest anti-Black institutionalized racism.

During the 2020 election, Bird and her teammates spoke out against Republican Georgia Senator Kelly Loeffler. At the time, Loeffler co-owned the women’s basketball team Atlanta Dream, a team that supported BLM. Loeffler had spoken out against BLM, and so to protest, Bird and teammates told fans to vote for Loeffler’s Democratic political opponent, pastor Raphael Warnock.

In January 2020, Loeffler lost to Warnock. By the following February, Loeffler was no longer the team’s co-owner.

Both Rapinoe and Bird also signed onto a September 2021 legal brief submitted to the Supreme Court supporting abortion rights, arguing that reproductive freedom is integral to supporting women’s sports.

After Trump slammed Rapinoe for saying that she wouldn’t visit the White House if her team wins the Women’s World Cup, Trump publicly called her disrespectful. Bird then wrote a column mocking Trump’s pettiness

She wrote, “[Trump’s reaction] would be ridiculous to the point of laughter, if it wasn’t so gross. (And if his legislations and policies weren’t ruining the lives of so many innocent people.)”

If their shared political activism is really the secret foundation of their relationship, then Rapinoe and Bird have lots of common ground to build upon together.