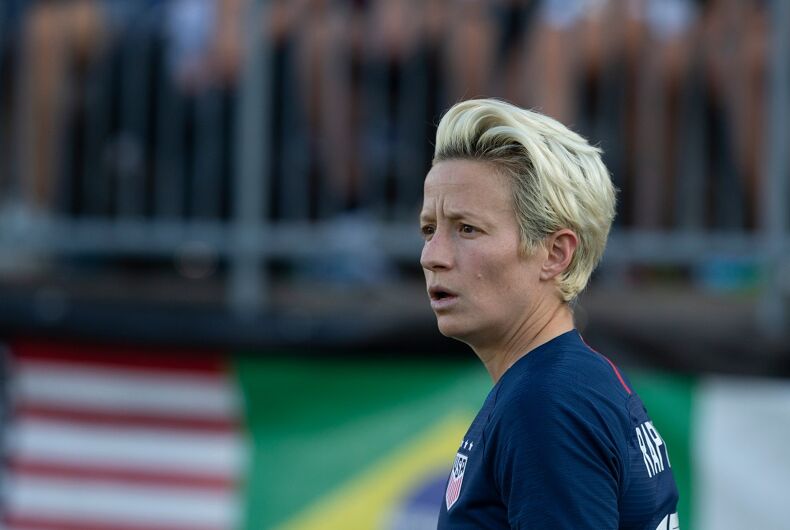 Earlier this week, Rapinoe told Eight by Eight magazine that she would not visit the White House if the U.S. Women’s National Soccer Team won the Women’s World Cup, which is being held now in France.

“I’m not going to the f–king White House,” she said.

She also said that she wouldn’t be invited anyway.

“No f–kin’ way will we be invited to the White House,” Rapinoe said in a separate interview, adding that Trump “tries to avoid inviting a team that might decline. Or, like he did when the Warriors turned him down, he’ll claim they hadn’t been invited in the first place.”

Trump was apparently bothered enough by what Rapinoe said that he gave a confusing response on Twitter. After citing a few talking points about how Black people have been faring under his administration, he made a joke about how Rapinoe’s team has won yet.

Related: Megan Rapinoe kneels during anthem before US match vs. Thailand

“I am a big fan of the American Team, and Women’s Soccer, but Megan should WIN first before she TALKS! Finish the job!” he wrote.

He followed that by invited Rapinoe and the team to the White House, no matter how they do at the Women’s World Cup.

“I am now inviting the TEAM, win or lose,” he wrote.

And he finished by accusing Rapinoe of disrespecting the American flag, probably a reference to her kneeling during the National Anthem in 2016.

“Megan should never disrespect our Country, the White House, or our Flag, especially since so much has been done for her & the team.”

Women’s soccer player, @mPinoe, just stated that she is “not going to the F…ing White House if we win.” Other than the NBA, which now refuses to call owners, owners (please explain that I just got Criminal Justice Reform passed, Black unemployment is at the lowest level…

….in our Country’s history, and the poverty index is also best number EVER), leagues and teams love coming to the White House. I am a big fan of the American Team, and Women’s Soccer, but Megan should WIN first before she TALKS! Finish the job! We haven’t yet….

….invited Megan or the team, but I am now inviting the TEAM, win or lose. Megan should never disrespect our Country, the White House, or our Flag, especially since so much has been done for her & the team. Be proud of the Flag that you wear. The USA is doing GREAT!

His tweets got some pointed responses.

1. You never apologized to the Central Park Five.

4. Black unemployment was cut in half under Obama and you took credit for his work.

What is actually inappropriate here is the President of the United States tagging an American citizen on Twitter to target more than 61 million followers and rabid political trolls to her social media account. Getting such a huge mob to target her is dangerous, petty, and cruel.

Does he know that @mPinoe isn’t black??

What the hell does visiting the White House have to do with Black Unemployment??