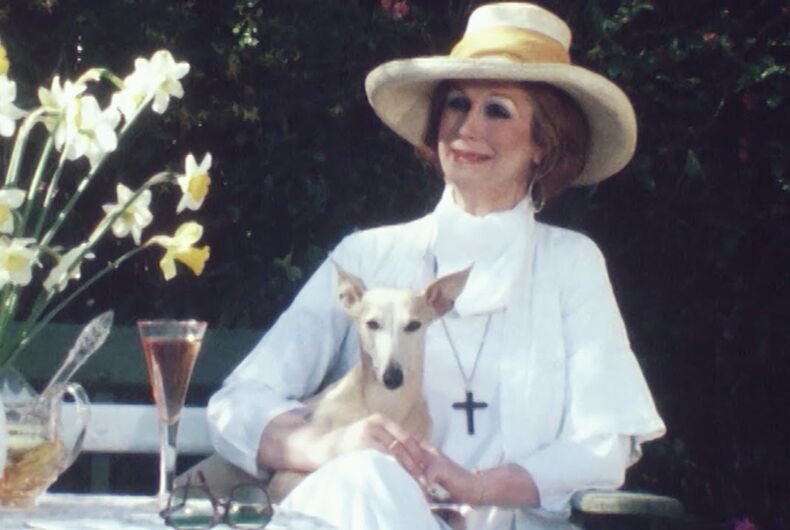 April Ashley, a transgender woman who was reportedly one of the first British women to undergo gender confirmation surgery and also the first known trans woman ever to appear in Vogue magazine, died recently. She was 86 years old.

Born in 1935 to a working-class family in Liverpool, she enlisted in the merchant marines in her teenage years. She then spent time in a psychiatric unit after numerous suicide attempts.

At age 20, she moved to London and then Paris where she performed at the queer and drag venue Le Carrousel nightclub. There, she gradually saved money to eventually undergo gender confirmation surgery in Casablanca, Morocco.

She chose the first name, April, because it was her birth month. She chose her surname, Ashley, after Ashley Wilkes, an anti-war and pro-abolition character in the book and film “Gone With the Wind” whose life dramatically changes following the U.S. Civil War.

Upon returning to England, she received government ID documents — like a driver’s license and passport — that identified her as female. She later appeared in Vogue magazine and appeared in films such as “Road to Hong Kong.” In that film, she appeared alongside big-name stars like Bob Hope, Bing Crosby and Joan Collins.

However, in 1961, at the age of 26, the British tabloid, Sunday People, outed her as transgender, effectively ending her career.

Nevertheless, two years later, she married an aristocrat named Arthur Cameron Corbett. When they divorced in 1970, the judge ruled their marriage invalid because Britain had no legal mechanism for officially changing someone’s gender at the time.

A TV interview at the time asked her about the divorce. “The judge came out very strongly against me,” she said, explaining the judge’s position that she was biologically male but socially female. “It sort of leaves you in limbo because I don’t know where I stand to this day,” she said.

In 1975, she had a heart attack. She then moved to San Diego in the U.S. where she lived with her cat named Lily Ashley John Wayne Bobbitt Tonya Harding. The name referenced a man who had his penis cut off by his abused wife and an Olympic ice skater who paid someone to injure her athletic rival.

Ashley didn’t return to Britain until 2005, when the passage of the 2004 Gender Recognition Act allowed her to be legally recognized as female.

In 2012, the British monarchy honored her as a Member of the Most Excellent Order of the British Empire (MBE), an award recognizing her activism for trans rights. In 2015, her hometown of Liverpool awarded her with Honour of the City.