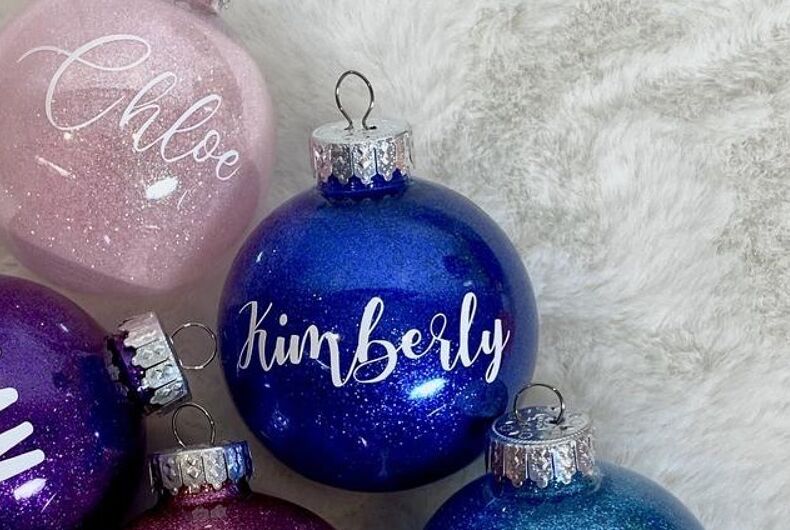 When Sarah Kogod launched the Rainbow Sheep Ornament Project last year, she had no idea how successful – and needed – it would be.

The project sends free personalized Christmas tree ornaments to trans people who have changed their names to help them start rebuilding sentimental mementos that don’t use their dead names. Holiday mementos mean so much to so many people, and Rainbow Sheep gives transgender people an opportunity to begin building those memories as their true selves.

Kogod credits LGBTQ Nation readers with a large part of the project’s success and could use a boost again.

“Last year we ended up sending 132 ornaments to Trans people in 9 different countries [and 36 states],” she said. “We had requests for people to add pronouns, partners, coming out dates, and even requests to commemorate dates they began hormone therapy.”

Kogod could not believe how many people were excited about the project.

“I knew we were doing something cool,” she said, “but I didn’t realize how impactful it would end up being. I have gotten emails and messages from people who reveal that this is their first ornament – and sometimes their first of anything – with their name on it. Others have said that their family keeps putting ornaments with their deadname on their tree, or they continue to get gifts personalized with their deadname.”

Last year was so successful that we're back for year 2! The Rainbow Sheep Ornament Project sends free personalized holiday ornaments to Transgender people who have changed their name. Here is more info on the initiative: https://t.co/LLbZEQ15uY pic.twitter.com/EjikXcEcYe

This year, Kogod hopes to reach even more people than last year, and hopefully in all fifty states.

“I’m looking forward to more people feeling validated through this project,” she said.

Those who request an ornament get to select both the color and lettering (purple was the most popular last year). To ensure every person has a positive experience, Kogod provides each requestor with a proof of what their name will look like on the ornament. That way, they can decide if they like how the lettering looks and confirm that their pronouns and name are correct.

Rainbow Sheep is currently seeking donations to support the project. Any extra money will be donated to Equality Federation, an LGBTQ advocacy organization.

Transgender people who qualify are asked to fill out a simple form online to get their ornament. No personal information is shared and there is no need for anyone to “prove” they changed their name.

“Transgender people are constantly being asked to prove their identity – at the airport, at hotels, at the store, when filling out forms, on job applications, and on and on,” the website says. “You don’t have to prove your identity to us – you are you!”

My ornament from the Rainbow Sheep Ornament Project arrived. ✨
thanks @sarahkogod … https://t.co/2d7P0BwmCj

The statement also acknowledges that without proof, some people might scam the system to get a free ornament, but says it’s a worthwhile price to provide a safe experience for the transgender community.

When it isn’t spreading holiday cheer, Rainbow Sheep is also an LGBTQ-owned shop selling queer-centric home goods, apparel, and other gifts created by LGBTQ artists and designers. Looking toward the future, Kogod also hopes to create projects that also include trans people who do not necessarily connect to ornaments.

Should 5% of companies’ profits be shared with everyone?