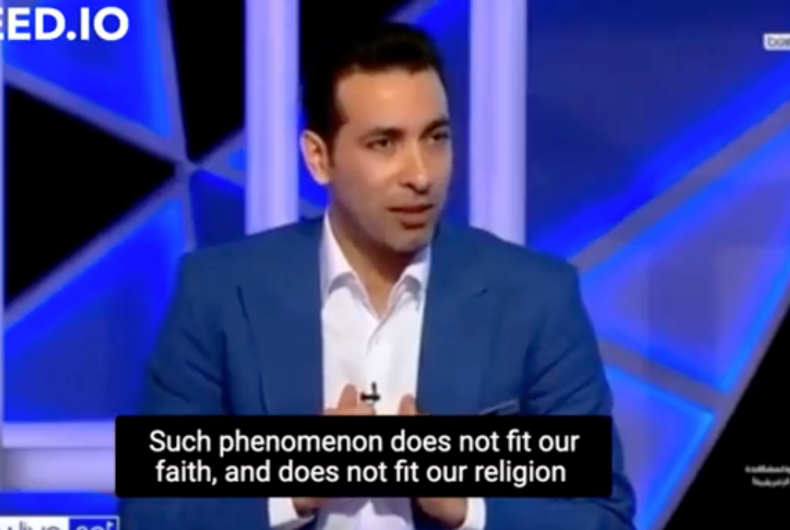 A retired soccer player lashed out at rainbow shoelaces earlier this week, saying that they promote the “dangerous ideology” of homosexuality.

“Our role is to stand up to this phenomenon, homosexuality, because it’s a dangerous ideology and it’s becoming nasty and people are not ashamed of it anymore,” said Egyptian soccer icon Mohamed Aboutrika.

Related: An out soccer player’s team destroys opponents after one of them uses anti-gay slur

He is a sports commentator on the Qatari beIN Sports channel – the dominant sports channel in the Middle East/North Africa broadcasting region – and he was talking about the English Premier League, which has been wearing rainbows at matches this past week as part of its Rainbow Laces campaign to support LGBTQ equality.

Aboutrika said that being gay “is not compatible with Islam” during his two-minute rant.

The Premier League “will tell you that homosexuality is human rights. No, it is not human rights; in fact, it’s against humanity.”

“This phenomenon is not only against Muslim nature but it’s against human nature,” he said. “Allah says in the Quran that we have to honor the children of Adam. But by doing this homosexuality we are not honoring humans, we are humiliating them.”

He said that the channel should “avoid everything LGBT-related” while broadcasting Premier League matches.

“We wholeheartedly disagree with the pundit’s views,” said a spokesperson for the Premier League. “The Premier League and its clubs are committed to supporting LGBTQ+ inclusion and making clear football is for everyone.”

According to The Guardian, executives at beIN Sports talked to Aboutrika about his comments but will not take any action to sanction or fire him. The channel has a nearly half-billion dollar contract with the Premier League to broadcast their matches.

Rishi Madlani, co-chair of Pride in Football, said that the Rainbow Laces campaign gets people’s “heroes” to speak out in favor of LGBTQ rights.

“Engagement with players has such an ability to change hearts and minds around this topic,” he said. “Our heroes are our allies.”

Aboutrika currently lives in exile in Qatar after the Egyptian government froze his assets and put him on a state terrorist list due to allegations that he is associated with the Muslim Brotherhood. Aboutrika denies the accusations.

Trans veteran Cris Blehar stabbed & shot to death. Her cousin made it a point to honor her.