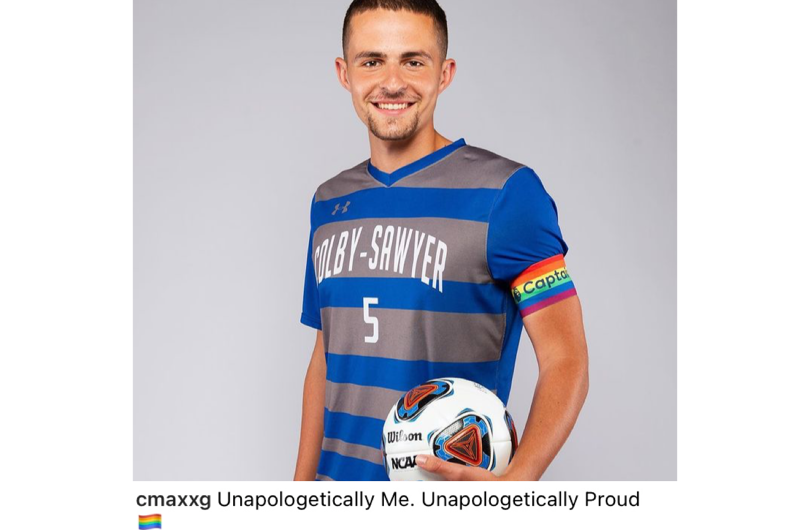 Couper Gunn, a defenseman and team captain on the Colby-Sawyer College’s Chargers men’s soccer team, was leading his team in a match against the Rivier University Raiders. This was Gunn’s fifth game of his senior season, played at Rivier’s home field in New Hampshire on September 22.

That’s when one of his opponents came up to him, mid-game, and told him, “Get that faggot armband off of you.” That would come back to haunt Rivier, as Colby-Sawyer didn’t take it lying down.

Right after being confronted with the homophobic language, Gunn fought back — and failed to contain — his tears in the locker room during halftime.

“I was upset I’d been called that,” Gunn said to Outsports, “but I was more upset because I was thinking about all the queer kids who that kid comes into contact with every day. He perpetuates that, even if he didn’t mean it, using the F word. And I was just so sad that someone like that exists, who would use that language. I was present with how unsafe and how unwelcome that made me feel for a few minutes.”

His teammates and coaches immediately sprung into action.

“Look at me,” Gunn heard head coach Bob Reasso, who has only had the position for three months, say to him.

“The first real emotion was just fury at the audacity of someone using a homophobic slur like that. It was outrageous to us,” teammate and co-captain Lucas Boetsch recounted after.

At the time, the game was tied 0-0 and neither team had scored. When play resumed, “I was completely off my game to start the second half,” Gunn recalled. But he wasn’t out there alone.

“When my teammates came in, immediately to start the second half, they brought the energy and made it easier for me to get my head back into the game,” Gunn said.

In the 53rd minute, les than 10 minutes out the gate from halftime,  Finn Husband scored a goal on an assist from Jadon Baros. In the 69th minute, Conor McKearin would also kick in a goal.

The game broke wide open from there. Less than 15 minutes later, the Colby-Sawyer Chargers would be up 5-0 on the Rivier Raiders, who were on their home turf and in front of their fans and peers. The Raiders would only get to attempt two more shots in the second half of the game; they missed both.

5-0 became the final score. It was the Chargers’ first win of the season.

“I was very proud of Couper in the way he responded,” Boetsch told Outsports. “You could tell he was visibly upset. He had a couple words with the opponent, and then he spoke to the referee afterward. And then the game went on.

“But the part I’m most proud of is that he didn’t retaliate,” he emphasized. “He had the opportunity to lay the kid out, but he didn’t. He let the game talk.”

After the game, Gunn made a TikTok recounting the entire ordeal. It has received over 40,000 views.

“Love always wins,” he captioned it.

Gunn didn’t end up scoring, but he played in all 90 minutes and led the Chargers to a shutout in response to how he was treated on the field.

After, he noted in the TikTok that “his team has a history,” but he chose not to elaborate on it. Instead, he focused on the fact that his own team was able to “embarrass them, at their fields, under their lights, in front of their home fans.”

In a follow-up TikTok, Gunn noted, “I could quite easily put this kid’s face and school and hometown all over the internet if I wanted to — and I don’t say that as a threat, but as a fact…

“If I were to do that, for me, it would serve no real good purpose. I just know that is not my style,” Gunn concluded.
“Education is my style… and I don’t see the point in alienating [the player] any more than he already is.”

For their part, Rivier’s Athletic Director Joanne Merrill said in a statement to Outsports that “Rivier takes any negative speech or actions seriously and is in all ways against them. We have taken this incident very seriously and have handled it in a way we view as appropriate. We regret that it happened and it in no way reflects what we are about and what we try to model.”

The NCAA Division III conference that the two teams are in, the Great Northeast Athletic Conference, also stated that “It is the league office’s understanding that the offending individual, his teammates, and coaching staff have made sincere efforts to offer apology to the Colby-Sawyer men’s soccer program. We hope this unfortunate incident sparks important conversation and provides further education,” they said before promising more resources toward “inclusive programming.”

Gunn came out as bisexual in 2019 and has been a proud member of the “alphabet mafia,” as his Instagram bio reads, ever since. He wrote an Outsports editorial in January, sharing how wearing a Pride shirt inspired him to share his identity publicly. He began proudly putting on the Pride armband he now wears with his uniform.

He has worked with the Sports Equality Foundation and given speeches and advice on how to deter “subversive” homophobic and bigoted beliefs in sports, including to his own team.

He is majoring in history and political studies at Colby-Sawyer, with a minor in education. Gunn plans to graduate this spring and continue studying so he can obtain a master’s in education,

This dad walked in on his son putting on make-up. His unexpected reaction will warm your heart.