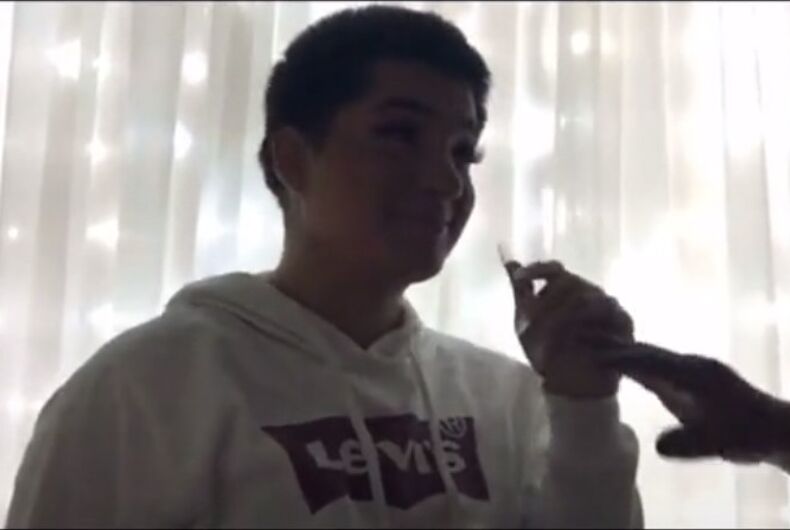 A heartwarming video has gone viral for showing a father embracing his son after he discovers his son putting on makeup. The video has gotten over 10.4 million views on TikTok so far.

The video begins with a teenage boy putting on makeup as he records a video on his phone. As his father begins knocking on his bedroom door, the boy turns down the lights so his father won’t see his face.

When the father enters the room, he asks what the son is doing in Spanish. The son answers that he’s making a video.

The father then turns on the lights and sees his son in make-up.

The video’s on-screen text reads, “I was sooooo embarrassed.”

“Is this what you want to do, Papa?” the father asks, calling his son the nickname Papa. The son tells his father to disregard it, looking away in embarrassment.

The father then reassures his son: “Because if this is what you want to do, you’ll be okay. I’ll be okay with you.”

He hugs his son.

“I love you, Papa,” the father continues.

“I love you. If that makes you happy, do it. Do it, but do it good. OK, Papa. I’m always with you. I won’t let you down in anything. Be happy,” he said, Pride.com reported.

The video shows how parents of LGBTQ youth can affirm their kids just by loving and accepting them. It also shows the benefits of doing so. It’s obvious that the son feels more supported now that he knows he doesn’t have to hide his make-up around his dad.