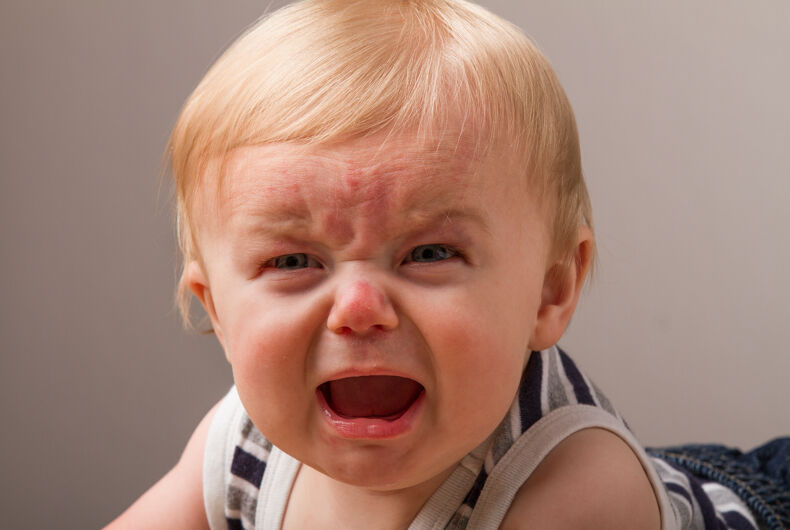 The right-wing Twitter accounts, Teachers_Exposed and LibsOfTikTok — which try to expose leftist liberals expressing “extremist” views — have taken a video of a self-described teacher joking about a “transphobic baby” way too seriously.

The video, taken from an unknown person’s TikTok account, shows a person speaking directly into a camera about their alleged encounter with the hateful infant.

Related: Right-wing Christians are creating their own parallel universe on social media

“I have talked about the transphobic baby at work before,” the person in the video begins. “I went in a room with him today and I had my wig on, which I took off now because it is like 9 o’clock at night. He didn’t cry and he was sort of babbling at me.”

“Then he started to cry,” the person says while smiling. “So that was my answer.”

It’s unclear where the original video came from or if the person in it is actually a teacher. Nevertheless, it has gotten nearly 200,000 views on the aforementioned Twitter accounts.

Many of the accounts’ commenters accuse the person in the video of being mentally unwell, being “systemically oppressed by a baby,” or being a danger to children. The fact the video-maker is completely joking has completely gone over the right-wingers’ heads.

Babies can’t actually be transphobic. When a baby acts calm and happy or upset and sad has almost entirely to do with their emotional state rather than their (likely non-existent) feelings on gender identity. In fact, the Mayo Clinic has said that babies don’t even recognize their own or other people’s gender until somewhere between the ages 18 and 24 months.

But then again, no one ever accused right-wingers of getting irony.

“Transphobic baby” this #preschool teacher came to the conclusion that one of her students is transphobic. #LGBTQ #transgender #classroom #education #Trans pic.twitter.com/PIcfR9SAtU