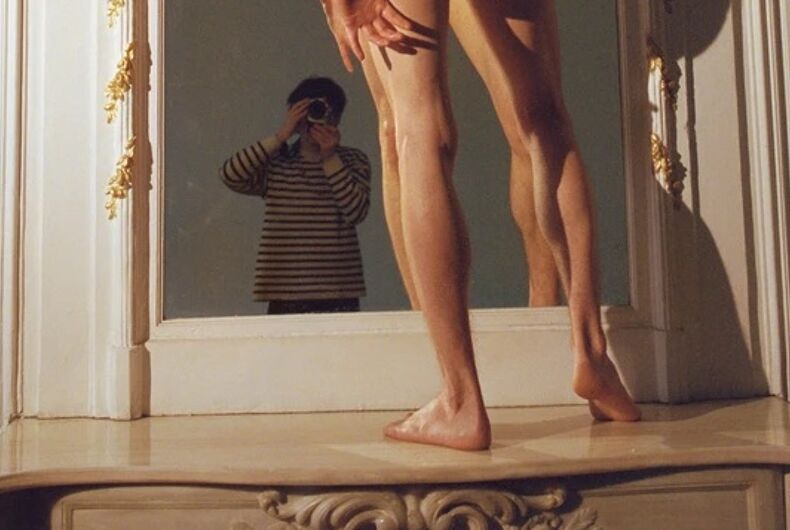 An image from Vlad Zorin's With Love from RussiaPhoto: Vlad Zorin

Russian photographer Vlad Zorin has defied Russia’s hateful law banning “gay propaganda” with his new photo book With Love from Russia. As such, he and his photo subjects risk arrest, fines and possible imprisonment.

The book features intimate portraits of gay Russian men alongside stories about their comings out, sexual awakenings, romantic relationships, heartbreaks, and (in some cases) contentment with life in an anti-gay country.

Related: Russia launches own version of RuPaul’s Drag Race but removes everything gay

Zorin — who was born in the west-central Russian city Chelyabinsk — currently splits his time between living in Moscow, Russia and Paris, France. As a part-time resident of Russia, his book runs afoul of the country’s so-called “gay propaganda”, signed into law by Russian President Vladimir Putin in June 2013.

The photographer said he got the idea for his book after having candid conversations about sex with his friends in Paris. Their admissions seemed so sexually liberated, and he wondered whether it was possible to have such sincere and honest discussions about sex as a gay man in Russia.

He found his participants through social media and visited their homes in order to shoot them in their native surroundings. In some cases, the men lived with their relatives, some of whom they hadn’t come out to.

The book contains the men’s portraits. Often the men are undressed, revealing an intimacy and vulnerability while underscoring their sexuality. Some of the men are masked to hide their identities. The images seem both inviting, yet isolated, an apt illustration of being gay in a country whose laws punish open queer expression.

In his book, Zorin shared their stories in both Russian and English, he explained in a recent interview with the Vice fashion magazine i-D:

“For me, it was important, firstly, to give the Russian male audience the opportunity to see their ideas about sexuality from the outside — with all the problems that are present in our view, which is why the book contains Russian language,” he said.

“I wanted it to include English to enable foreign audiences to expand their ideas about sex and sexuality in post-Soviet Russia and because the main message of the book lies outside national borders,” he continued. “With Love from Russia is a book that invites you to reflect on your sexuality, listen to yourself and your desires, compare them with other’s experiences and draw parallels.”

As for Russia’s gay propaganda law, it ostensibly seeks to “protect children” from any “propaganda of nontraditional sexual relationships” that might “raise interest… among minors.” However, it has mostly been used to shut down LGBTQ events and websites, break up LGBTQ families and harass queer-friendly teachers.

The law has been roundly condemned by the United Nations Committee on the Rights of the Child, the human rights groups Amnesty International and Human Rights Watch and civil rights activists around the world.