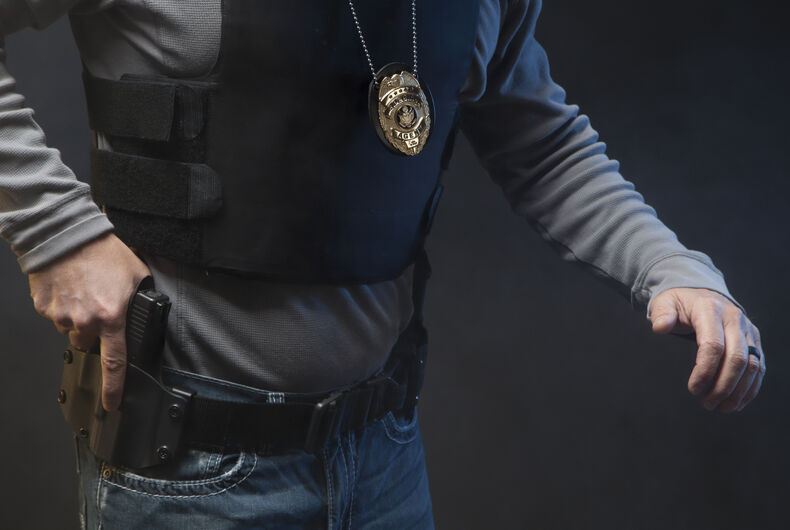 Hilda and Jesse, a San Francisco restaurant, has been forced to apologize after staff asked three armed police officers to leave. The eatery does not allow guns inside the establishment.

Officers turned it into an “anti-police” public relations nightmare for the restaurant that considers itself a safe space for queer and BIPOC people.

Related: How do we celebrate Pride when police are still beating & killing us?

The incident sparked outrage, including tweets from San Francisco Police Chief William Scott that painted the officers as the victims for being asked to follow the same rules as everyone else.

“The San Francisco Police Department stands for safety with respect, even when it means respecting wishes that our officers and I find discouraging and personally disappointing,” Scott said. “I believe the vast majority of San Franciscans welcome their police officers, who deserve to know that they are appreciated for the difficult job we ask them to do — in their uniforms — to keep our neighborhoods and businesses safe.”

The officers were not responding to a call; they were at the restaurant to eat.

The owners originally tried to explain what had actually happened, saying, “Our restaurant is a safe space – particularly for queer and bipoc [Black, Indigenous, and People of Color] individuals. Furthermore, the fact that they were in uniform with multiple weapons on them made our staff uncomfortable, and potentially other guests, so they were asked to leave. We would happily welcome them off duty, out of uniform and without weapons.”

The San Francisco police have a long history of vicious persecution of the queer community. Transgender women, especially Black trans women, are frequently harassed and singled out.

Police shootings and the use of unnecessary force have repeatedly made national headlines for the past several years, with people of color taking the brunt of the violence. Activists nationwide have rallied to the Black Lives Matter banner, staging protests across the country to highlight police shootings of unarmed Black people.

But after blowback on social media, fanned by the police chief’s three-part series of tweets, the owners have apologized.

“We made a mistake and apologize for the unfortunate incident Friday when we asked members of the San Francisco Police Department to leave our restaurant,” co-owners Rachel Sillcocks and Kristina Liedags Compton wrote in an Instagram post.

“We are grateful to all members of the force who work hard to keep us safe, especially during these challenging times. We hope this will be a teachable moment for us as we repair and continue to build bridges with the SFPD. These are stressful times, and we handled this badly.”

The restaurant’s ratings online plummeted as social media users condemned them for being “anti-police.”

I just spoke exclusively to one owner of Hilda & Jesse.

Rachel Sillcocks told me “it doesn’t matter what you do, whether you’re a security guard of a policeman”— they don’t want any weapons #SanFrancisco pic.twitter.com/yGog0Dym4M

(1/3) Community engagement is a core principle of SFPD’s 21st century police reforms, and we are intentional about asking our officers to support local businesses and get to know those they’re sworn to safeguard. https://t.co/nJsk4hy0tB

(3/3) I believe the vast majority of San Franciscans welcome their police officers, who deserve to know that they are appreciated for the difficult job we ask them to do — in their uniforms — to keep our neighborhoods and businesses safe.

15 LGBTQ podcasts you need to listen to right now