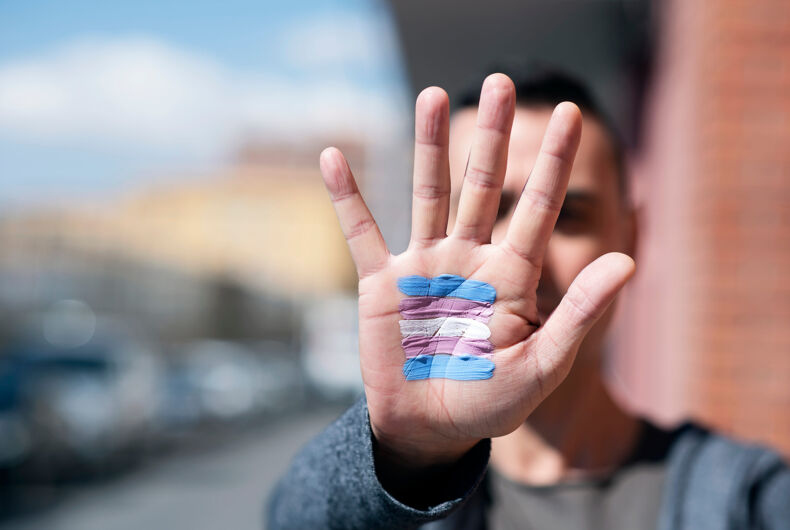 Internalized transphobia, or the internalization of anti-transgender attitudes by transgender people themselves, is a problem for many members of the transgender community. In a society where some medical providers deny healthcare to transgender patients because of religion or “personal reasons,” coming to terms with one’s gender identity can feel nearly impossible.

Fortunately, there are now more resources for members of the transgender community than ever before. If you think you might be struggling with internalized transphobia, this guide is for you. In it, you’ll learn about why it occurs and how you can get help.

Related: You’ll be surprised to see who’s not standing up for transgender rights

Internalized transphobia pertains to a transgender person’s negative feelings towards their transgender identity. In most cases, feelings of shame keep them from coming out to their loved ones, seeking medical help, and result in negative health outcomes.

While it affects each transgender individual differently, most claim to experience feelings of worthlessness and even suicidal ideation. In effect, many people who suffer from internalized transphobia will attempt to “pass” as a cisgender person or isolate themselves from other LGBTQ+ community members.

Environmental factors are the primary causes of internalized transphobia. Thanks to oppressive gender stereotypes, many transgender people feel they “fail” to conform to society’s norms. What you may not know is that a person’s struggle with gender expression can occur as early as childhood.

Family units that reinforce traditional gender roles can have a strong negative impact on transgender youth. For instance, a young male child might be discouraged from playing with dolls or wearing “feminine” clothing, which can create mental health problems in the long run. In severe cases, society’s normative gender expectations can put young gender nonconforming people at risk of familial abuse.

Schools also play a significant role in a child’s formative years and may contribute to negative mental health outcomes. For example, a school might segregate restrooms according to gender or disallow female students from joining “traditionally male” sports teams. Young children struggling with their sexual orientation might also become subject to bullying and discrimination from teachers.

Like schools, churches and other youth organizations that perpetuate transphobia exacerbate feelings of shame. Some even subject young trans people to physical abuse, sexual assault, or conversion therapy.

Conversion therapy is any attempt to change a questioning person’s identity to suit societal norms. Compared to LGBTQ+ youths outside of conversion camps, those admitted to these institutions are five times more likely to develop internalized transphobia and stigma consciousness.

How Do You Know You Have Internalized Transphobia?

If you experience internalized transphobia, you may not always know it. However, there are some telltale signs that you can look out for.

Internalized transphobia can make sustaining romantic or even platonic relationships extremely challenging or impossible for many transgender individuals. Some transgender persons might intentionally sabotage their relationships out of shame or choose not to pursue any relationship altogether.

Some transgender and gender nonconforming people also subject themselves to perfectionism because of constant rejection and prejudice. When they fail to meet self-imposed expectations, they run the risk of becoming reclusive and often experience psychological distress.

According to the U.S. Transgender Survey, 39% of sexual minorities reported experiencing psychological distress, while 40% reported multiple suicide attempts. Because transgender people are often victimized by others’ negative beliefs and discrimination, they are twice as likely to experience depression, anxiety, and self-loathing.

These minority stressors within the trans community can also lead to substance abuse, eating disorders, and other forms of self-mutilation.

In 2020, the Human Rights Campaign recorded the deadliest record of trans-related hate crimes. Because of this open hatred and fear, trans community members who lack robust support systems are often less willing to assess their internalized transphobia with a healthcare professional.

In many instances, victims of hate crimes may not even report such incidents to the police and instead act “cis-passing.” Others might also delay seeking LGBT health services for AIDS and HIV because of social stigma or pressure from family members.

How To Overcome Internalized Transphobia

Despite the struggles transgender communities face, there are many ways to overcome internalized transphobia.

One of the best ways to come to terms with your trans identity is to seek gender-affirming therapy. According to the American Psychological Association, gender-affirming therapy does not seek to “repair” transgender clients but, rather, help them learn to acknowledge their shame, trauma, gender-related abuse, and other depressive symptoms.

If you experience gender-based discrimination, therapy can create a safe space where trans people can identify stigma-related stressors and overcome them. Some common forms of therapy include:

People who struggle with gender minority stress might be discouraged to seek medical help for sexually transmitted infections (STIs) and viruses like HIV or AIDS. Fortunately, there are thousands of gender-affirming healthcare institutions where gender nonconforming clients can access:

For transgender individuals who lack social support, joining an advocacy group can significantly decrease distal minority stress and mitigate interpersonal and individual stigma. Below are just a few of the best LGBTQ+ advocacy groups in the country.

The National Center for Transgender Equality is a group that provides LGBTQ+ legal services and resources regarding transgender rights within the workplace. Here, transgender individuals can also get acces to self-help guides and connect with mental health professionals.

Many transphobic beliefs are reinforced by generational differences. However, groups ilke Transfamlies exist to bridge the gap between transgender individuals and their families by facilitating group therapy sessions, online discussion forums, and support groups.

Many nonconforming adults experience internalized transphobia because of workplace discrimination. The good news is, the Transgender Law Center can help you determine whether an employer is trans-friendly before your pursue a working relationship with them.

This international trans-led organization provides information about a company’s oppression scale, which indicates whether an institution has an anti-discrimination policy.

For someone with internalized transphobia, feelings like shame and fear replace pride and confidence – these are issues that Gender Proud is committed to undoing. This online community works specifically with feminine spectrum transgender people and transgender athletes. It aims to help sufferers of internalized transphobia overcome inferiority complexes within the workplace by providing them with unique working opportunities.

If you are a trans military service member, access to a public health clinic for LGBTQ+ individuals may seem impossible, especially if you’re stationed overseas. SPART*A connects trans military workers to crisis hotlines, advocacies, legal services, and healthcare establishments no matter where they are in the world. It also provides grants for emergency relief and passport fee assistance.

People with internalized transphobia are often victims of transgender-related discrimination, sexual assault, and an oppressive upbringing. However, learning to come to terms with – and even fully embrace – your gender identity is entirely possible with some time, effort, and support!

Related: Outpouring of love for trans woman who regrets transition because of haters

LGBTQ commercials of 2021 that will warm your heart