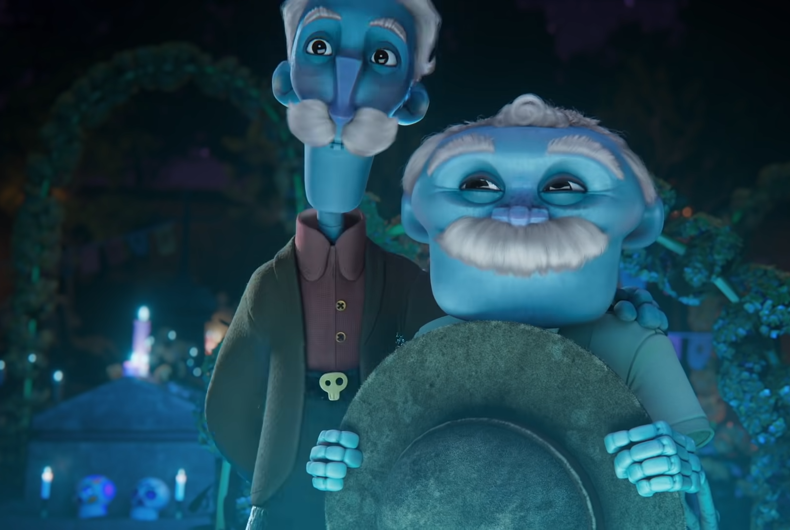 Doritos Mexico's Day of the Dead commercial has the internet talking.Photo: Screenshot

Inclusive advertising is super important, and 2021 well and truly pulled it out the bag with LGBTQ commercials.

Let’s take a look at some of the best LGBTQ commercials throughout this year, and hope 2022 brings even more representation to our screens because, after all, you can’t be what you don’t see.

This commercial from CarGurus was actually hailed “the gayest commercial of the year” by many. Titled “I Need Space,” the commercial normalizes a male-male relationship with humor and jest, in such a casual sort of way.

The 30-second ad shows one gay man shopping for cars online as he declares his need to “move on” and get “more space” for his outdoor gear. Naturally, his partner misinterprets what he said, assuming he’s about to get dumped.

In the midst of the panic, a young guy emerges from a bigger SUV on CarGurus to explain how the company matches users with their perfect cars and, in this instance, can offer more trunk space.

The ad ends with a sweet hug between the couple and the now much calmer boyfriend thanking the SUV man for saving his relationship.

Titled When Harry met Santa,’ the simply adorable queer love story marks the upcoming ​50th anniversary since homosexuality was decriminalized in the country.

It begins with the titular character gazing lovingly as Saint Nick disappears up the chimney. It then cuts to just after Christmas Eve when Harry is despondent knowing he’ll have to wait a whole year to see Santa again.

Finally, unable to contain his love, Harry writes Santa a letter that reads, “All I want for Christmas is you.”

In an act of true Christmas magic, his wish comes true and Harry and Santa share a kiss.

This gorgeous commercial from 96-year-old jewelry house Bhima follows the traditional narrative of a loving family gifting their daughter jewelry in the lead up to her wedding day, but there’s a difference in this tale, as the main character is trans.

Titled “Pure As Love” and with 22-year-old trans actor Meera Singhania Rehani playing the lead role, the ad sees an awkward teenager with facial hair slowly transform into a confident bride who beams with joy on her big day, with the full support of her family.

The ad was praised by audiences across the world for its inclusivity, and it brought many viewers to tears for how beautifully it was made.

Their shampoo commercial centered around a young trans girl and her two moms, who ensured there wouldn’t be a dry eye in the house as they explained the importance of hair in the young girl’s gender affirmation.

Moms Ashley and Ellie narrate the ad, sharing how, once Sawyer came out to them, one of the first things she wanted to do was to grow out her hair as an expression and affirmation of her gender.

They say their family motto is, “Everybody loves everybody no matter what path you follow,” which Sawyer says allows her to be who she is “no matter what.”

Sharing their ad online, Pantene themselves announced: “Hair is a large part of our identity and for LGBTQ+ youth like Sawyer, who choose to express themselves, their style, & their creativity through their hair style, it can help them feel seen.”

Nike introduced the company’s latest addition to its “Play New” campaign in the form of soccer player Mara Gomez, who is the first trans woman to play in Argentina’s professional league.

In the 60-second ad, Gomez is seen practicing her soccer skills, working out, laughing, and flexing for the camera. She also discusses the impact the sport has had on her life.

Gomez says, “Today I’m the first professional transgender player in Argentina. And it was not easy, because I didn’t have a role model to follow. So it’s my turn to open the door for the athletes to come.”

At the end of the commercial, soccer balls drop from the sky around Gomez as she watches in wonder, already able to imagine herself inspiring future generations.

If you’ve never cried at a Doritos ad, well, now’s your chance!

The heart-melting commercial was released for Día de Los Muertos, the holiday where Mexican and Latin American communities honor their loved ones who have died.

The ad sees the family of beloved Uncle Alberto gather with candles and flowers to remember him after his passing. His spirit then appears, to everyone’s surprise, and he comes out as gay to all of his living relatives, standing proudly and hand-in-hand with another man – who is now his partner.

After a moment of silence, the family rejoices as the commercial concludes, “It’s never too late to be your true self,” with the hashtag #PrideAllYear.

eHarmony warmed queer hearts with a commercial that is the very definition of domestic bliss. Titled “I Scream,” the ad was part of the dating site’s Real Love campaign and its efforts to shift the company from its conservative origins.

The commercial strikes the perfect balance between sensual and sweet as viewers get to see lesbian couple cooking together, snacking on ice cream, cuddling and kissing during a cosy night in.

Everything is so normal and casual, in all the ways it should be.

How to overcome internalized transphobia