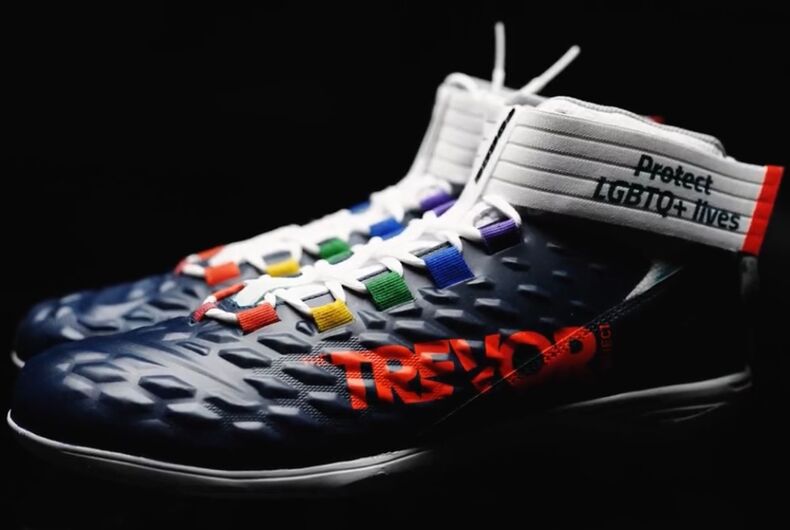 Carl Nassib's cleats for 2021's "My Cause My Cleats" initiative. It will support the Trevor Project.Photo: Screenshot/Raiders

This weekend is the NFL’s annual “My Cause My Cleats” initiative, which is a series of in-season games where players across the league are allowed to wear cleats outside of the uniform-mandated norm, in support of a non-profit or charitable organization. Players can then auction the cleats and raise even more money for them directly.

For the first time, multiple NFL players will be supporting organizations with primary LGBTQ causes, as well as several more will support organizations that help LGBTQ people with other causes too.

Carl Nassib, the first player in the NFL to play in the regular season while being out, will support the Trevor Project, the same organization he supported when he came out this June.

Additionally, Johnny Stanton, a fullback for the Cleveland Browns, selected Athlete Ally as the cause for his cleats.

This not only marks the first time multiple players are supporting organizations dedicated to LGBTQ causes in the same “My Clause My Cleats” run, but Nassib and Stanton are only the second and third known players to do so.

According to Outsports, only one other player has chosen an LGBTQ organization for “My Clause My Cleats” ever before, since it started in 2018. Preston Williams, a wide receiver for the Miami Dolphins, chose local LGBTQ group Pridelines as the cause represented by his cleats in 2019.

“I chose the cleats because everyone is their own person. You can’t be mean to somebody about what they like or who they like,” Williams reflected this year. This week, Williams is honoring his own self-named foundation.

Stanton chose his cause because of a closeted uncle and nearly Olympic swimmer, Patrick Stanton, that he wanted to honor because “He never felt comfortable enough to come out while he was swimming… [and] I don’t want the athletes coming out today to feel like they can’t be themselves,” the fourth-year veteran said.

He has made it a point to be a vocal advocate on social media, especially this year.

“The fact that some people don’t feel comfortable enough in their own identity to participate in sports breaks my heart. No one should feel unwelcome on the field or the court,” Stanton told Outsports. “If just one person being an ally can help them feel more comfortable, then I’m happy to be that person.”

Here's a closer look at @johnnystantoniv cleats for #MCMC this year. After the Browns week 14 game against the Ravens, they will go up for auction, all benefits to @AthleteAlly

It was Honor to be part of this project. Thanks again for reaching out! ✊🏾🌈♥️ pic.twitter.com/e1y7CMerVh

Nassib, however, has already been deemed out this weekend due to a knee injury he’s been dealing with.

Earlier this season, Nassib became the first out NFL player on an active roster for a team. He became the first player to take the field in a regular season NFL game while out a few days later.

It's all in the details 🎨 #MyCauseMyCleats

A closer look at the cleats you’ll see on Sunday. pic.twitter.com/QBrYgGqhhJ

Additionally, other causes that support LGBTQ people or LGBTQ rights, while not being solely dedicated LGBTQ causes, are being included this year. For example, San Francisco 49ers’ linebacker Fred Warner has selected the Born This Way Foundation, the organization started by bisexual entertainer Lady Gaga to provide mental health resources to youth. However, an injury may also keep Warner sidelined this weekend.

Both Carolina Panthers defensive end Marquis Haynes and Green Bay Packers cornerback Eric Stokes selected STOMP OUT Bullying, a cause that “educates against homophobia, LGBTQ+ discrimination, racism and hatred” towards the goal of eliminating bullying and online bullying. Connor Williams, an offensive guard for the Dallas Cowboys, selected Anti Bullying Pro — an initiative started by the Diana Award, which is named after the late Princess Diana.

Still, Outsports notes how the number of LGBTQ supporting athletes remains low, especially in contrast to the hundreds of other groups being selected in other causes.

Additionally, San Francisco 49ers quarterback Trey Lance selected the Fellowship of Christian Athletes (FCA), an anti-LGBTQ organization, for his cause. He told Outsports that he selected them based on the personal experiences he had with the group growing up and was not aware of their core tenet to push the belief that “God’s design for sexual intimacy is to be expressed only within the context of marriage” and that “marriage is exclusively the union of one man and one woman.”