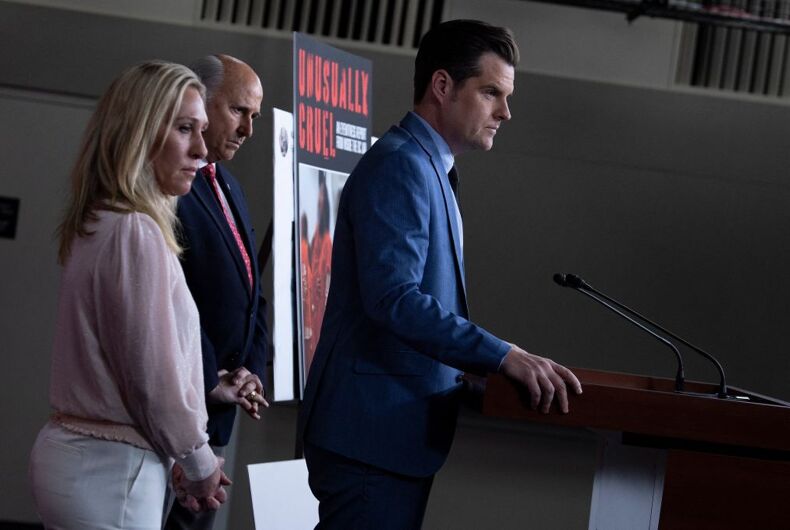 Rep. Matt Gaetz (R-FL) made a chilling prediction about what would happen if Republicans win the majority in 2022. His terrifying promise should be included in every Democrat’s campaign ad.

During a press conference with other far-right members of the House, Gaetz envisioned what new GOP leadership would bring to the table: partisan witchhunts and political persecutions.

“We are going to take power after this next election and when we do, it’s not going to be the days of Paul Ryan and Trey Gowdy and no real oversight and no real subpoenas,” he told reporters at a press conference that focused on the conditions inside the Washington DC jail where insurrectionists who stormed the Capitol building are being held.

The congress members have always insisted that the rioters should be freed. A recent investigation into the appalling conditions at the facility has only provided them more political fodder to press their wild demands.

“It’s going to be the days of Jim Jordan and Marjorie Taylor Greene and Dr. [Paul] Gosar and myself doing everything,” promising to investigate a debunked conspiracy theory that the rioters were actually anti-Trump activists who wanted to make MAGA supporters look bad.

Gaetz has every reason to continue attacking federal prosecutors. He is currently under investigation for child sex trafficking.

Rep. Marjorie Taylor Greene (R-GA), a QAnon conspiracy theorist who regularly makes wild claims about pedophilia common among the theory’s adherants, has remained his steadfast political ally, standing beside Gaetz as he spoke.

Together, the two launched the Put America First PAC, complete with a barnstorming tour of the heartland. The duo claimed they were leading the vanguard of the new GOP voter and had the support of the average voters. Except their events were canceled and those that weren’t didn’t raise any money. Campaign donations for the two have also dried up as former supporters tire of their antics.

Greene and Gaetz spent the summer trying to raise funds for their PAC, but within six months after launch, it was almost broke.

A nightmare scenario that should send us all screaming to the polls.

If that's not the 2022 campaign ad for Democrats I don't know what is. https://t.co/kYrfectr2Z