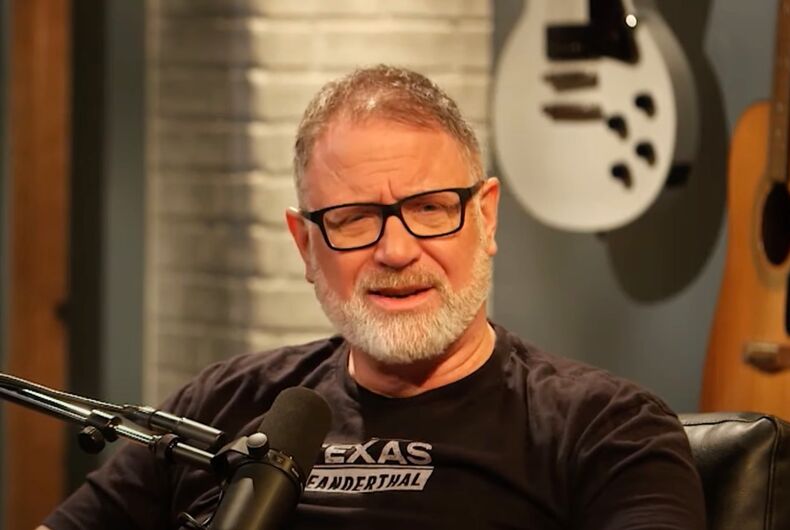 For years, Jeff Younger has made national headlines for vehemently opposing his transgender daughter’s ability to live as her true self. After years of legal battles, Younger eventually lost custody of Luna (a name he refuses to acknowledge) to her mother in August. He also lost custody of Luna’s twin brother.

Now Younger is running for the Texas House of Representatives with a platform entirely based on transphobia.

Related: Rachel Maddow says Donald Trump should face charges: “This is him confessing”

“The state of Texas is trying to transition my son into a girl,” Younger says on his campaign website to explain why he is running.

Continuing to deadname and misgender Luna, he claims supporting her gender identity is child abuse and that her life is in danger, along with the lives of other transgender children in Texas.

“Because I resisted the Court’s attempt to transition my son, the 301st District Court in Dallas County took my children from me. My ex-wife now has authority from the State of Texas to cross-dress my nine-year-old son.”

“The courts allowed this abuse of my son without my consent and over my objections. I’m running for Texas State Representative in District 63 to save my son’s life and the lives of thousands of other children in Texas.”

Luna, now eight-years-old, became the center of a right-wing media blitz on trans youth and gender affirming healthcare over the last two years when her father claimed that her identity was being forced on her by her mother, Dr. Anne Georgulas. The court, though, heard that doctors and mental health professionals recommended that Luna be allowed to express her gender identity.

While Georgulas was ultimately granted full custody, the judge ordered she cannot seek hormonal therapy, puberty blocking treatment, or gender-affirming surgeries for the children “without the consent of the parents or court order.” She was allowed to make decisions about the children’s medical, psychiatric, and psychological care without input from Younger.

Luna’s story has been used by the conservative media over the years to promote the idea that children are being forced by parents to transition medically.

A “petition” by the anti-LGBTQ right wing site LifeSite News gained tens of thousands of signatures in support of stopping any affirming of Luna’s identity. Texas Gov. Greg Abbott (R), using her deadname, tweeted that he would have the Texas Attorney General’s Office and Department of Family and Protective Services “look into” her case, even though courts already had.

Sen. Ted Cruz (R-TX) claimed that Luna is “a pawn in a left-wing political agenda,” while Rep. Dan Crenshaw (R-TX) remarked that “A 7-year-old can’t possibly make this decision or understand it. Parents should know better,” adding that he hope Younger “receives the public support he needs.”

Conservative to alt-right media such as the Texan, the National Review, and the Federalist continue to deadname and misgender Luna. They argue that she is identifying as trans “against her father’s wishes.”

The claim that Younger was trying to “save” his seven-year-old child from hormones and surgery, which were unlikely treatments for a child her age, continues to be perpetuated.

In reality, she had begun to socially transition, and evidence was submitted to the court that showed that Luna identified as a girl, even when neither of her parents were present, and denied being told to identify as a girl by her mother.

Now Younger hopes to become a state representative to outlaw all gender-affirming health care for minors – something Texas Republicans have relentlessly fought for – despite also purporting that he believes in limited government.

Under the “Issues” tab of his website, Younger also says that he is against abortion, against vaccine mandates, and believes critical race theory should be banned from schools because it is “anti-white racism.” Conservatives use the expression “critical race theory” not to refer to the school of legal thought developed in the late 20th century but to describe any education about the history of racism in the U.S.

Younger also says that gun ownership should not only be a right in Texas, but that the state should promote owning guns “as a public good.”

Far-right Republicans opposed military funding bill because of trans soldiers. It passed without them.